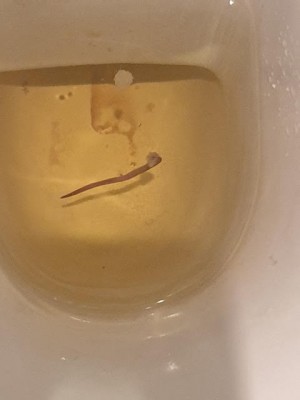 “I have seen the worm in the picture in our toilet bowl on two separate occasions,” states this reader about the pink worm we can see in the picture our reader is referring to. At first, our reader attributed the discovery of the worm to flushing his cat’s excrement down the toilet, but now only he has been using the toilet, and he is curious as to where it might be coming from. 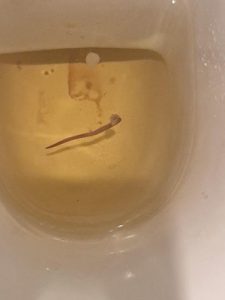 To expand on this, our London-based reader states that the first sighting of the worm was “about 8 weeks ago”. At that point in time, the only thing being flushed down this particular toilet was his cat’s droppings. When he first found the worm, he put his cat on medication. Now, eight weeks later, our reader has spotted an identical worm in his toilet. The difference now is that since the first worm was spotted, “cat poo has not gone down the toilet one.” Instead, only our reader has been using the toilet. From the picture our reader sent in, the worm appears to have the same shape, length and color as a typical earthworm, and that is what we think this is. At first, we thought the blotchy spot of white near the right end of the worm was a part of the worm, but we concluded it was likely a patch of foam instead.

Earthworms can often find their way up people’s drains, and so are commonly found in toilets. Usually this is because there is a leak somewhere in the water pipe underground where the earthworm would have easy access to it. Our reader might want to contact a plumber in that case. It is also possible that the leak is nowhere near our reader’s own property; the earthworms could have entered the pipe system from however far away, so it is difficult to say whether or not making such a call is necessary. Either way, we are sure our reader is relieved to know that the worm is not some parasite that could have come from his cat or himself. All he needs to do to get rid of any worm he does find is move it outside, though we understand that if they keep coming he is going to want a more permanent solution. In addition to potentially calling a plumber, we also urge our reader to make sure he keeps to a consistent cleaning regime for his bathroom. It could be that the earthworm chose this toilet in particular because it had gone a while without being cleaned; as earthworms feed on decomposing organic matter, they are likewise attracted by its presence.

In conclusion, the worm our reader found in his toilet is an earthworm. They are not parasitic, nor harmful in any way toward humans, so our reader need not fear for his cat or himself. Of course, if he is concerned about the health of his cat or himself, then we urge him to take his cat to the vet and seek medical advice for himself as well. We wish him the best!

Article Name
Pink Worm in Toilet is an Earthworm
Description
"I have seen the worm in the picture in our toilet bowl on two separate occasions," states this reader about the pink worm we can see in the picture our reader is referring to. At first, our reader attributed the discovery of the worm to flushing his cat's excrement down the toilet, but now only he has been using the toilet, and he is curious as to where it might be coming from.
Author
Worm Researcher Anton
Share the knowledge

People helped by this info: 882