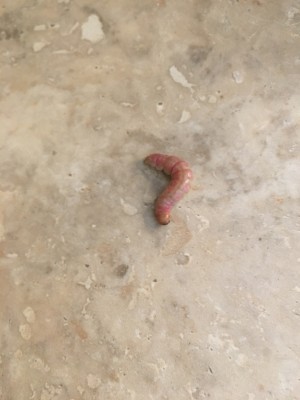 A reader of ours from Phoenix, Arizona recently sent in this image of a species of worm she has been finding once a day, in or near her hall bathroom. The worm appears pink in color, with a white underside, and is segmented with multiple sets of legs. 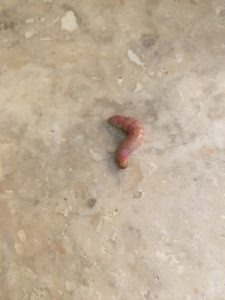 Our reader states that she has been living in a home dating back to the early ’70s for over a year, but has never seen these before. She guesses they are a couple of inches long in length, as displayed in the photo where the creature is compared in size to the baseboard corner of a wall. 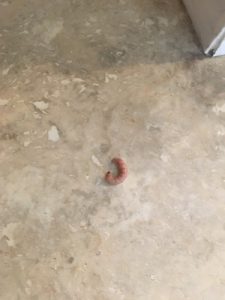 We wish to commend our reader for sending in an array of great quality photos, as well as a rather amusing video of the worm rolling over on its side to move across the floor (see video below). This visual information greatly helps us identify the creature. The creature we are looking at here is a palm flower caterpillar, otherwise known as the carpet caterpillar.
Video of Palm Flower Caterpillar Rolling

Palm flower caterpillars are the larval form of the palm flower moth and tend be around an inch long. These creatures live in abundance in California and Arizona, sticking to the hot, desert climate where palm trees grow. Palm trees are not only their habitat, but also their source of food. Once the caterpillars are about to enter their pupal stage (the stage between larva and moth), they tend to crawl to the base of the tree to build a cocoon. However, strong winds can blow the caterpillars off the trees, which is what leads them into people’s homes, specifically to people’s carpets, which is where they get the nickname ‘carpet caterpillar’. Yet, unlike a carpet beetle larva, a palm flower caterpillar will not eat much of a carpet, but only enough to make room for a cocoon. Hence, these creatures are not considered true pests. It is also possible that they use upholstery or books to build their cocoons in.

Furthermore, it is peculiar that these creatures were found near the bathroom, as given the palm flower moth’s preference for dryness, they are not known to crawl up pipelines. Perhaps our reader has a carpet perfect for building a cocoon in, or near, her bathroom that the caterpillars are attracted to. A perhaps more reasonable, but uncommon explanation would be that a palm flower moth laid eggs in her bathroom, and now they have all started to hatch. This would make sense given how old the house is; it is possible that there are cracks in the walls or baseboards where the moth could have laid its eggs. This would also explain why our reader has seen one caterpillar a day. 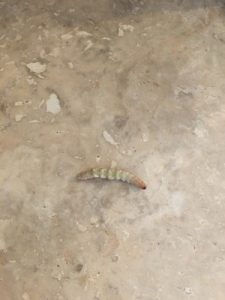 Unfortunately, infestations of these caterpillars can occur, so action should be taken immediately. Luckily, simply removing the caterpillars should suffice, preferably to a palm tree. We should warn our reader though, these caterpillars have a strong jaw and vicious bite. The bite is not venomous, but the front of its head is comprised mostly of muscle which operates the caterpillar’s jaw. For this reason, removing it using a dustpan, or a piece of paper and a cup, is probably the safer route to take. If our reader discovers one of these caterpillars in its pupal stage (when it is in a cocoon), we urge her to take extra precaution when handling it so as not to kill it. Likewise, in order to prevent more palm flower caterpillars from entering her house, we recommend that our reader seals all the cracks in her house that the caterpillars could possibly crawl through, as well as covering vents and ensuring all window screens are whole and in good quality.

In conclusion, the pink worm that our reader found near her bathroom is a palm flower caterpillar. These creatures are not pests, but they are an infestation risk, and although they are otherwise harmless, they pack a powerful bite if threatened, so be careful handling them! We hope this has helped our reader in Arizona and best of luck to her.

Article Name
Pink Worm in Phoenix is a Palm Flower Caterpillar
Description
A reader of ours from Phoenix, Arizona recently sent in this image of a species of worm she has been finding once a day, in or near her hall bathroom. The worm appears pink in color, with a white underside, and is segmented with multiple sets of legs.
Author
Worm Researcher Anton
Share the knowledge

This many people searched for this info: 2,828