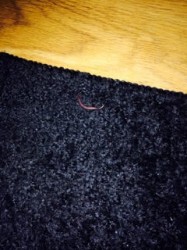 We heard from a reader who discovered a worm that buried itself in his bathroom carpet. He wants to know what type of worm it is, and how to get rid of it without throwing out his carpet.

The picture he sent shows a thick, long, pinkish worm on a dark shag carpet. The photo doesn’t reveal any other details about the appearance of the creature, so a firm identification will be tough.

Since we don’t have very many clues to go off of, we will use the location of where he discovered the worm as our biggest clue. What pink worm might be found in a bathroom? Our first thought is earthworms. We often hear from readers who find earthworms in their toilets or showers. The origin of the worms could be a leak in a pipe that goes into the soil around the house. Another possibility is roundworms. These slightly resemble the worm in the photo, however they are parasitic to humans and it is unlikely that our reader had one of these living in him without any symptoms. If we had to choose between these two creatures, we believe he is dealing with an earthworm, but we are not sure.

As far as cleaning his bathroom carpet, our reader should start by removing the worm and placing it outside. There is no way to know whether the worm reproduced in the carpet. Therefore, we recommend having it professionally cleaned! If our reader doesn’t want to go through the hassle of going to the dry cleaners, he could just replace the bathroom carpet.

If our reader wants a more solid answer to his questions about the species of the worm he found, we encourage him to send another photo that captures more of the worm’s appearance.

In conclusion, our reader came across a pink worm burrowing itself into his bathroom carpet. We think this might be an earthworm.

Article Name
Pink Worm in Carpet Might be an Earthworm
Description
We heard from a reader who discovered a worm that buried itself in his bathroom carpet. He wants to know what type of worm it is, and how to get rid of it without throwing out his carpet.
Author
Dori Franklin
Share the knowledge

People helped by this info: 748