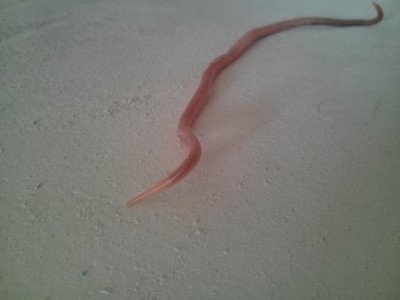 Pink “Worm” Could Be A Snake

October 21, 2016
One of our readers unexpectedly came across this pink colored worm-like organism when he was working on the renovation of a new building. Although the creature is pretty small, it apparently gave him quite a scare! So what is this specimen? And how should he handle finding it in his work space? 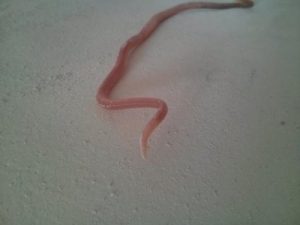 After a quick glance at the specimen, we thought “Oh! It’s an earthworm!” The organism has the same body type as an earthworm: thin and long. It even has the same pinkish-brown coloring. However, after taking a closer look at the photograph, we aren’t convinced about our initial identification. The featured specimen doesn’t appear to have segments like an earthworm does. We suppose that the organism-in-question could have a segmented body, and we just can’t see it in the photos. However, even after zooming in we saw no trace of segmentation. Also, when we zoomed in to investigate the segmentation, we noticed a faint white line on the creature. It appears as if the line traces exactly where the dorsal and ventral sides of the creature meet. We have never seen a line such as this on an earthworm! So, what could this creature be?
We think it might be a snake! We aren’t sure of the species, as we are not extremely familiar with snake identification. So, what should he do about this potential snake? We think it would be best for him to usher the snake back outdoors. There are a couple of ways to do this. He can use a broom to gently sweep the snake towards the door and outside. Or, he can drop a large towel on the snake and scoop it into a pillowcase.
In summary, a reader discovered a pink worm-like organism in a building he is renovating. We think the pink creature might be a snake! If any of our readers are familiar with this specimen, please share your knowledge in the comment section. 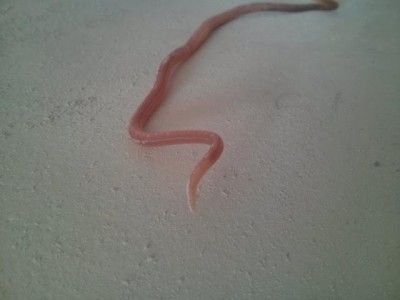 Article Name
Pink
Description
A reader discovered a pink worm-like organism in a building he is renovating. We think the pink creature might be a snake!
Author
Dori Franklin
Comments: 0 Posted by: Worm Researcher Dori Categories: Worms Found in the House