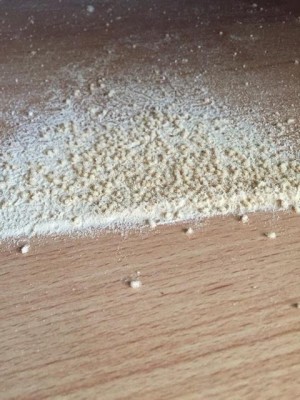 Pile of Worms Could Be Powderpost Beetle Larvae

Today we will respond to a reader who found one “pile of worms” under each of her two couches. She isn’t sure what kind of worm or worm-like organism she has found and is curious about what they might be. The photo shows a bunch of tiny white organisms in a white substance that looks a bit like sand: 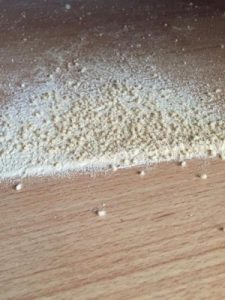 We think our reader might be dealing with powderpost beetles and their larvae. Powderpost beetles are a group of 70 different species of wood-boring beetles.  They are named “powderpost” because the beetles feed on wood and over time, if left undisturbed, they are capable of reducing the wood to a pile of fine powder, like the substance in this photo. Since they are rather destructive, they are often considered pests.

Powderpost beetle larvae spend months, or even years, inside of the wood developing and feeding on the starch content of the wood. Most people don’t even realize the creatures are present until they notice a mass of powdered wood, or when the beetles emerge as adults. If the conditions are right, adult female beetles will lay their eggs before emerging and the cycle may continue for generations totally unnoticed by humans.

We don’t know what item these powderpost beetles might have infested. It could be the frames of the couches that the piles of dust were found under, or it might be the wood floor itself. Our reader can investigate both the floor and the couch frames for tiny holes (about the size of a piece of pencil lead) to determine where the pests are inhabiting. If they are in the frames of the couches, we recommend our reader remove the couch from her home immediately. If the beetles are in the wood floor, there is a natural solution she can try in order to get rid of these pests. We recommend she try applying cedar oil to the area around the holes. Cedar oil is non-toxic and safe for humans and pets, but it will repel and kill some insects. Also, while it will eliminate powderpost beetles, it is harmless for bees and butterflies, which are considered beneficial insects.

In conclusion, one of our readers might be dealing with powderpost beetles and their larvae in her home. We recommend she begin by locating the wood that they are inhabiting, and then start the process of saying goodbye to the pests.

Article Name
Pile of Worms Could Be Powderpost Beetle Larvae
Description
One of our readers might be dealing with powderpost beetles and their larvae in her home. We recommend she begin by locating the wood that they are inhabiting, and then start the process of saying goodbye to the pests.
Author
Dori Franklin
Comments: 0 Posted by: Worm Researcher Dori Categories: Grub Worms, Worms Found in the House