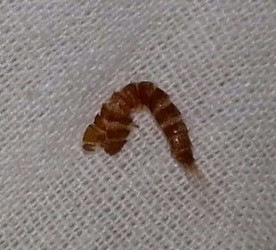 A few days ago a reader sent us three pictures of what appears to be a carpet beetle larva (or probably carpet beetle larvae – the three images don’t appear to show the same exact creature). The reader only asked us for an identification, so we have basically already answered that question, but below we’ll discuss our thinking, as well as share the photos of the carpet beetle larvae our reader submitted. They are quite clear, and show the creature from a few different angles.

The first image appears to a show larva that has been partly crushed, although most of its body is still intact:

The second image shows an undamaged larva from slightly further away: 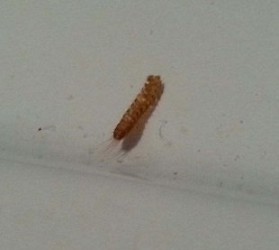 And the third is a relatively up-close image of the larva on purple carpet: 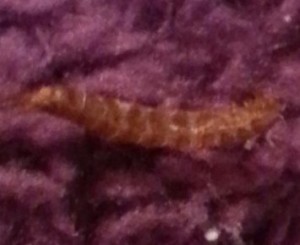 All three of these images pretty clearly depict carpet beetle larvae. We can’t be absolutely certain this is what the reader found, but everything seems to suggest this. Before moving on, though, we should quickly note that the reader asked us what kind of “worm” she found, and even in the unlikely scenario that he didn’t actually find carpet beetle larvae, he is definitely dealing with some sort of larvae, not a worm, at least as we define the word “worm.”

Like so many other names of insects, worms, and larvae, “carpet beetle” refers to a number of different species; in this instance, “carpet beetle” refers to several members of the family Dermestidae. The beetles can vary somewhat widely in appearance, and the larvae do as well. Some of the larvae are almost round with hairy bodies – e.g., varied carpet beetle, or Anthrenus verbasci – whereas others are more elongated. The larvae our reader found appear to be a black carpet beetle, or Attagenus unicolor. The bodies of black carpet beetle larvae, which are brown when in larval form, tend to become slightly narrower on their posterior ends, where they also have a clump of long hairs, and as you can see this description matches up well with the creatures pictured above.

Article Name
Pictures of Carpet Beetle Larvae
Description
A few days ago a reader sent us three pictures of what appears to be a carpet beetle larva.
Author
All About Worms
Comments: 0 Posted by: Worm Researcher Evan Categories: Pest Worms