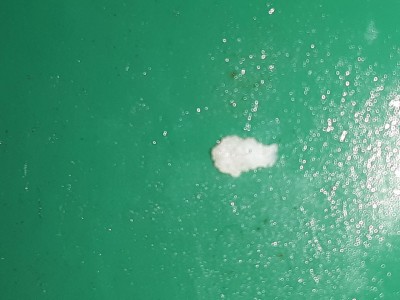 A man found small white worms in every piece of wood in his house and hopes that we can help identify what they are. The image sent in below is difficult to make sense of; there appears to be a smear of white in the center against the green background (which we assume is supposed to be the worm) as well as rings of white surrounding it on all sides. 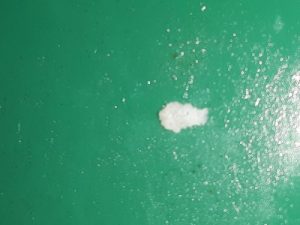 First and foremost, our reader asked us specifically to tell him the identity of a “small white worm” that burrows into skin and “immediately hatches a bunch of babies.” To be frank with our reader, we are not sure exactly what it is he means. In fact, the question he posed, and the context in which he found the worms seem unrelated to us. Unless we are to assume that the worms he found in the wood in his house also burrowed into his skin and laid eggs? These two different situations would call for completely different areas of research; we are either researching for potentially parasitic worms that burrow into skin, or worms that live in or feed off of pieces of wood in the house.

Secondly, while the picture is decent in quality, we are not quite sure what we are looking at. This ‘white smear’ does not resemble any worm we have seen before. In fact, it does not resemble a worm at all, but rather, well, a smear. Additionally, it is difficult to tell if the rings of white surrounding the smear are the eggs that this worm supposedly “immediately” lays, or if they are simply reflections of light from whatever background this photograph was taken against.

Thirdly, given the ambiguity of the question’s relationship to the context of the situation, as well as the uncertainty regarding the contents of the photograph, there are two routes we can go down. The first route is assuming this is a worm that bores into people’s skin and lays eggs. If that were the case, then this situation would become one of a medical nature. As we are not medical professionals, we cannot provide diagnoses, nor treatment for our readers. For this reason, we encourage our reader to consult a medical professional, or a parasite specialist, which he may do by doing a Google search for “infectious disease physician (name of city).” The second route is taking this worm to be one that burrows into wood, rather than skin. The two things, as far as we know, are mutually exclusive.

One worm that can commonly be found in pieces of wood (especially firewood) is the larva of the wood-boring beetle. These larvae are small and white, as described by our reader, as well as segmented, with a black head. These critters infest dead or decaying wood, and can actually live for several years before they move on from their larval stage. Whilst they are not a danger to healthy trees, or humans, they are considered a household pest, as they can chew through wooden furniture and firewood. In addition to this, adult wood-boring beetles lay their eggs in the cracks of wood, from which the larvae eventually eat their way out after hatching (which is when most of the damage is done). That brings us to another point worth mentioning; in most cases worms cannot “immediately” hatch their eggs, but it is a process, and in some cases, a lengthy one.

Furthermore, to deal with the infestation, there are two approaches one can take, according to DoMyOwn. The first approach is only appropriate in the case that the infestation is no longer active (active ones are indicated by wood powder being present, as well as actual worms). This approach constitutes sealing the wood with a wood sealant, which should successfully prevent more wood-boring beetle larvae from laying eggs in the cracks. The second approach requires one to completely replace the infested wood with new wood, and treating the new wood. The link above will provide more specifics on what this entails. Before going so far as to replace all of his wood without being sure that these worms are wood-boring beetle larvae, we urge our reader to consult some kind of professional to give an opinion as to what these worms could be.

To conclude, it is unclear what it is our reader found, and what he actually needs to be concerned about. Regardless, there are steps he can take to identify the worms that are bothering him, and we hope and encourage him to take these steps.

Article Name
Parasites or Harmless Larvae? These Small White Worms Invade this Man's Home
Description
A man found small white worms in every piece of wood in his house and hopes that we can help identify what they are. The image sent in below is difficult to make sense of; there appears to be a smear of white in the center against the green background (which we assume is supposed to be the worm) as well as rings of white surrounding it on all sides.
Author
Worm Researcher Anton
Comments: 0 Posted by: All About Worms Categories: Pest Worms, Worms Found in the House, Worms Generally