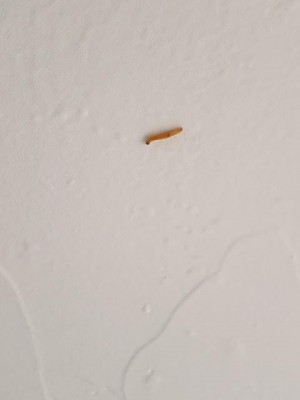 Orange worms have been popping up all around this woman’s kitchen, and she wonders how she can get rid of them, and where they originate from. Besides being orange, the worm in the photograph appears to perhaps be somewhat transparent, is minuscule in size, and has a brown head. 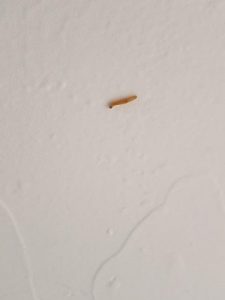 Given the information provided, as well as the physical characteristics of the worm, we would conclude that this is an Indianmeal moth larva. The Indianmeal moth larva is a terribly common pest that is most often found in one’s kitchen and in grocery stores. It is found in these places because its diet actually consists of stored food products. How a creature that prefers processed food stored in man-made containers came to be is as much of a mystery to us as it is to anybody. That being said, their diet is still quite varied; they will eat anything from grains to spices to dog food. The origin of their name came from the discovery that these critters are a pest of the Indianmeal corn crop.

In regards to their appearance, the color of the fully grown Indianmeal moth is a dull gray and brown, though black stripes do run across their lower brown section, which makes their appearance a tad more exciting. At their larval stage, their color depends on what they have been eating. Commonly, Indianmeal moth larvae are an off-white with either a pink, brown or green hue. It is possible that with certain lighting, the larvae can appear orange as in the case of our reader, but we will not rule out the possibility that they genuinely were orange too. Given the fact that their color is contingent on their diet makes this entirely probable. Furthermore, on the topic of their physical appearance, Indianmeal moth larvae tend to be 1/2-inch and have five sets of prolegs which they use to crawl about the kitchens they infest.

When it comes to ridding one’s kitchen of these pests, it really boils down to cleaning and vacuuming out cupboards, drawers and other small, dark spots that these creatures could be hiding. Likewise, any infested foods should be thrown away as it will no longer be edible. Once an item of food is infested, the Indianmeal moth will spin large spools of silk which then collect the faecal pellets they leave behind; this is what one can look out for if checking for an Indianmeal moth infestation. Additionally, the Entomology and Nematology department at the University of Florida recommends freezing the food prior to throwing it out to ensure that whatever organisms remain there (be it eggs or the larvae themselves) die before being thrown out. Otherwise, they will simply continue to infest one’s kitchen.

Lastly, with respect to where Indianmeal moth larvae originate, it is a simple of matter of the mother moth laying the eggs directly on the food source. Thus, in order to prevent future infestations, it is advisable to make sure that once food is brought home from the grocery store, immediately refrigerate products that need refrigerating, and store other food where they cannot be accessed by the moths (they are tiny, so even a small gap can make one’s food prone to infestation!). Likewise, all dog food, cat food, and other pet food needs to be properly sealed as well.

To conclude, the ‘tiny orange worms’ our reader found in her kitchen are Indianmeal moth larvae. These critters can be quite the annoying pest to have to deal with, but are not harmless at all to humans. They do not carry any known diseases, pathogens or parasites, so even if one did consume an Indianmeal moth-infested product, one would likely not suffer any consequences, besides the shame of having eaten moth poop.

Article Name
Orange Worms Found in Kitchen are Indianmeal Moth Larvae
Description
Orange worms have been popping up all around this woman's kitchen, and she wonders how she can get rid of them, and where they originate from. Besides being orange, the worm in the photograph appears to perhaps be somewhat transparent, is minuscule in size, and has a brown head.
Author
Worm Researcher Anton
Comments: 0 Posted by: All About Worms Categories: Caterpillars, Indian Meal Moth Larvae, Worms Found in the House