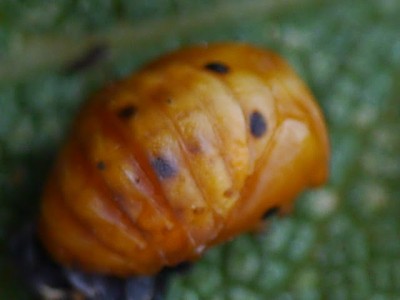 Two interesting looking bugs have recently been discovered on this reader’s sage plant in Oxfordshire, England. The creatures in question are of two different colors, orange and black, but of the same appearance, being an ovate shape, with segmentation along the body and spots marking their bodies. 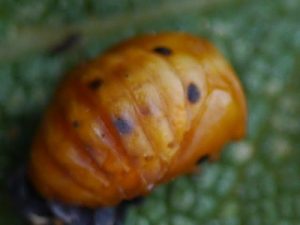 Our reader also provides us with two more photographs, one being a close-up of the orange critter we see in the photograph above, and one a close up of the darker, gray creature that looks quite different to its orange friend. As it turns out, the critters in question are harlequin ladybirds, also known as Asian ladybug beetles. The ones our reader found seem to be at the pupal stage. When fully grown, the harlequin ladybird looks like any common ladybird, having an ovate body characterized by a beady, black head and starkly colored wings with a pattern of spots. Their color can vary between red, orange and cream. Although they originated in the Asian continent, there are populations of harlequin ladybirds across the Americas and Europe. In fact, the harlequin ladybird was only introduced in the United States as a form of pest control in hardwood forests that were full of disease ridden insects. However, the downside of their introduction to various countries is that they pose a threat to already existing species of ladybirds as they compete for resources. 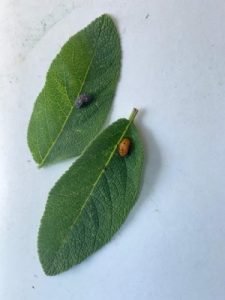 Further to this, what sets these ladybirds apart from other native species of each respective country is the response people have had to them. Generally speaking, ladybirds are adored by children and adults alike, but upon discovering the vicious bite of the harlequin ladybird, many have shunned them from their homes. Perhaps we are exaggerating a tad when it comes to how vicious their bite is, but it is nonetheless bad enough to cause pain and mild discomfort. In addition to this, the harlequin ladybird may secrete a yellow substance when threatened that is pungent in smell and sticky to the touch, which is used to ward off predators.

When it concerns the critters our reader found, we think that the ladybirds are at their pupal stage because of the physical characteristics of the orange pupa (this being the color harlequin pupae tend to be at that stage), who lacks legs and whose orange body is distinctly spotted with black dots. In regards to the dark-colored pupa with legs, we think this too is a harlequin ladybird pupa, but that it is simply at a different stage of development. At their larval stage, harlequin ladybirds are black, with orange markings on their backs and six forelegs sprouting from the top of their bodies near the head. In the photograph below, we can see that the gray creature has legs, so it is our opinion that this larva has just begun molting (the process of a larva shedding its skin to begin pupation), and so has changed color. Clearly, it has not quite tucked in its legs into the eventual chrysalis it will create around itself. 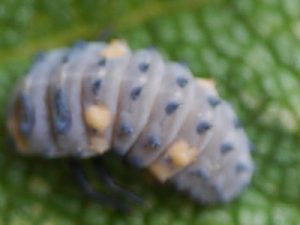 Unfortunately, homes are prone to infestation by harlequin ladybirds, so if our reader’s sage plant was indoors, she may want to consider contacting a professional to deal with the infestation, as it can be very difficult to control and eradicate these infestations. In actual fact, once harlequin ladybirds have infested a home, they tend to come around every summer as they know that it will be a good place to nest. Luckily, they do not lay eggs inside, but they can nonetheless prove to be a nuisance. Without contacting a professional, the best our reader can do right now is ensure that all of the cracks and crevices in her walls, flooring and window screens are sealed one way or another. Using caulk is a good idea to seal cracks in flooring and walling, but when it comes to window screens, they usually have to be completely replaced, as tape is not a permanent solution.

To conclude, the two “bugs” our reader found on her sage plant are harlequin ladybird pupae. It is with regret that we must inform our reader about the high risk of infestation, as well as their tendency to bite humans if threatened. If our reader attempts to manually move the creatures from her home, we encourage the use of protective gear, such as gardening gloves, and that she be gentle and cautious with them. And we wish the best of luck to her.

Article Name
Orange and Gray Bugs Found on Sage Plant are Harlequin Ladybird Pupae
Description
Two interesting looking bugs have recently been discovered on this reader's sage plant in Oxfordshire, England. The creatures in question are of two different colors, orange and black, but of the same appearance, being an ovate shape, with segmentation along the body and spots marking their bodies.
Author
Worm Researcher Anton
Share the knowledge