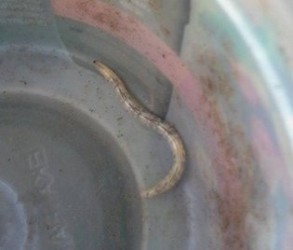 We recently received a question through the All About Worms Facebook page about a white worm in the top soil of a reader’s garden. The white worm (or potentially white larva) is about an inch long (2.5 centimeters) and is fairly skinny. The reader was only looking for an identification, so we’ve concentrated our efforts on this matter. What could a one-inch white worm or larva in the garden be?

Here is the picture the reader submitted along with her question:

As our use of the words “worm” and “larva” partially suggest, we’ve had some trouble figuring out what this creature is. In most cases, when people write to us about “worms,” they actually mean some sort of larva, and this has been true of people inquiring about garden “worms” as well (unless they are only talking about regular earthworms). Thus, when we first confronted this question, we filed through some of the common larvae people find in gardens, which are often connected to a specific crop. For example, we considered potato tuberworms (Phthorimaea operculella), which can be white like the creature above, although in general they don’t look identical. However, the creature above, with its elongated body and lack of legs (as far as we can tell), does look like an actual worm, as we use the word “worm,” and we can’t get around this fact.

This leads us to think that our reader perhaps found a white worm. These simply named creatures make up the family Enchytraeidae, and they live in a broad range of environments, ranging from glaciers to marine habitats. The species our reader might have found is obviously a terrestrial white worm, and it might be a so-called “potworm,” which are found in highly organic environments on land, like compost bins. Indeed, we have only heard of white worms in the context of composting, but they could of course be added to a garden if one’s compost bin contains these worms, and perhaps that is how the reader found one in the top soil of her garden, assuming she did in fact find a white worm. And unfortunately we can’t be sure this is what she found, but it’s a suggestion that is worth looking into.

Article Name
One-Inch White Worm or Larvae in Garden
Description
The white worm (or potentially white larva) is about an inch long (2.5 centimeters) and is fairly skinny.
Author
All About Worms
Comments: 2 Posted by: Worm Researcher Evan Categories: Garden Worms