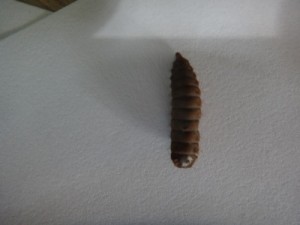 A reader wrote to us about some dark brown worms he is finding in his garage under rugs. The worms are about one inch long and are described by the reader as “crunchy when stepped on.” The reader has found several of the brown worms, so he is keen to get rid of them. And so the question before us is this: what are these dark brown, one-inch long worms, and how do you get rid of them?

Two possibilities suggest themselves, neither of which are worms. (Things that are described as “crunchy” are generally not worms, at least as the word “worm” is commonly understood.) The first is the carpet beetle larva, which immediately comes to mind because of the “carpet” part of its name. The larvae do in fact feed on carpets, and so very easily could have been found under a rug in the garage. (They don’t exclusively eat carpet, for the record; they also eat various types of materials in, for instance, furniture, clothing, and bedding.) They are also brown, or at least some species are (e.g, the varied carpet beetle), which is consistent with our reader’s description of what he found. However, the one limitation of this suggestion is that these larvae tend to be quite small, under a half an inch (12 millimeters) in length. This is not universally true, and they could be as long as an inch, but this generally isn’t the case.

Another possibility is that our reader found black soldier fly larvae, which are also known as “Phoenix Worms.” We have written quite a bit on black soldier fly larvae, so we won’t delve into all the details here. These creatures do tend to be brown, and they can also be about an inch long, although they tend to be slightly shorter, in the range of 1/8 to 3/4 of an inch (or 3 to 18 millimeters). (The reader can check out a very clear picture of black soldier fly larvae if he clicks on the link just provided.) Although carpet beetle larvae might be described as crunchy when stepped on, another reader has explicitly used the word “crunchy” to describe black soldier fly larvae, so the BSLF hypothesis seems pretty strong from the standpoint of physical description. Finally, the place the reader found the larvae could very well sustain them if there is decaying organic matter around. Perhaps there are some leaves under the garage rugs, for instance, enticing the creatures to crawl underneath.

Regardless of what our reader found, we can offer some generic advice for getting rid of the unwanted creature, although we should note that neither is harmful and that a garage will probably always have its fair share of bugs in it. First, the reader should take the obvious step of removing the creatures he has been finding. The goal will be to break the life cycle of larvae, so you can’t let the current generation perpetuate itself. Also, the reader should thoroughly clean the effected area, making sure to remove stuff like decaying organic matter to cut off a food source (at least for BSFL). The rugs should also be washed, or if they are super old and dirty, it might be worth just getting rid of them. Finally, the reader might consider trying to address obvious gaps in the garage that the larvae might be crawling through. Perhaps there is a large crack under a door that leads outside, for instance. (This is why it’s hard to eliminate bugs from a place like a garage – it generally isn’t as impervious to the outside world as one’s home.)

Hopefully one of our two suggestions has correctly identified what our reader has found, and we further hope that taking a few relatively simple measures should take care of the black soldier fly larvae or carpet beetle larvae problem. The best of luck to our reader.