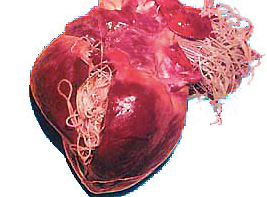 A reader asks, “How do you get heart worms in the human heart?” Naturally, we at All About Worms are not medical professionals of any kind and our statements should in no circumstances be taken to constitute medical advice, but we do believe we possess a set of knowledge items germane to this reader’s concern. The reader asks specifically about those types of worms, if any, which may invade the human heart, a concern which is understandable both because of its obvious consequences for human health and due to the fact that popular accounts of heartworm tend to center on its occurrence in dogs and other animal hosts.

Heartworm refers specifically to the parasite Dirofilaria immitis, a species of roundworm (recall that the terms roundworm and nematode have identical meanings). More precisely, D. immitis is a type of filarial roundworm, which refers to a small, threadlike worm. Its life cycle is complicated, involving a larval stage, transmission from a mosquito vector into the animal host via an infected mosquito biting the soon-to-be host, subsequent maturation of the larvae into worms which infect the right side of the heart and pulmonary arteries, mating of the worms to produce larvae released into the host’s bloodstream, and finally ingestion by an uninfected mosquito when it bites the host.

By far the most common animal host of the heartworm is the domestic dog, but heartworms can also infect other animals including cats, wolves, coyotes, foxes, ferrets, sea lions, beavers, and, in exceptionally rare cases, humans. Although one can take considerable comfort in both the rarity of human heartworm infection and the fact that infection in humans rarely causes clinically significant disease, the risk of rare overwhelming dissemination in the pulmonary artery has resulted in isolated cases of considerable morbidity and mortality. However, heartworm infection in humans is so rare that D. immitis is not considered to be an appreciable public health risk by any relevant epidemiological body. In fact, the main human health concern related to heartworm results from the fact that clinically insignificant heartworm infection may produce a special kind of lung nodule known as a granuloma when the heartworm dies immediately after it enters the human lung. Such a granuloma may occasionally appear incidentally on a chest x-ray taken for an unrelated purpose, prompting costly and potentially invasive interventions to exclude more dangerous conditions such as lung cancer.

To address the reader’s specific concern, the major risk factors for heartworm infection in humans (such as they are) are limited to the ambient climate and states of compromised immunity. The temperature of the immediate environment significantly effects the time required for maturation and transmission of the worm, and at temperatures below 14 degrees C (57 degrees F) its life cycle stops completely.

It is extremely important to seek the advice of a qualified and appropriate physician when one has any pulmonary symptoms (including but not limited to cough, wheezing, shortness of breath, or coughing up blood) or other suspicion of heartworm infection or any other disease state. We must again insist that the previously stated information in no way constitutes medical advice of any kind, and our statements are not intended to influence the medical decisions, including the decision whether to seek care, of any person. It is also worth emphasizing that heartworm in domestic animals, and especially dogs, does not share the rarity of human heartworm disease and is therefore of much more pressing concern. All pets should receive routine preventative and other appropriate veterinary care in order to prevent and treat heartworm and other ailments.

This many people searched for this info: 3,387