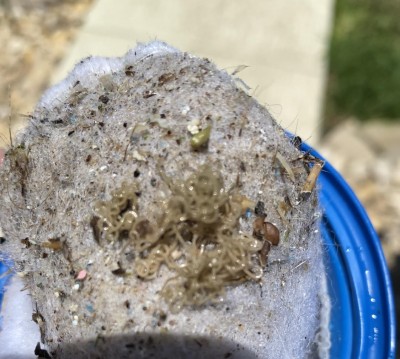 Noodle-Like Gray Worms in Swimming Pool May Be Roundworms

“I just found these after vacuuming my pool” says this reader about a tangle of gray worms pictured below in the photograph our reader sent us. “They are quite long and active” and are “at least two inches” in length. “What are they?” our reader asks. 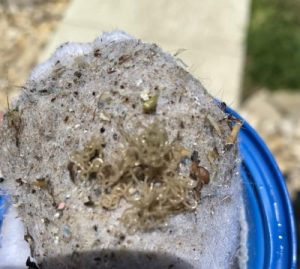 Our reader mentions that the worms were found in her pool after “vacuuming” it with “regular chlorine”, and that her pool is a “ground pool.” We are not sure exactly what our reader means by this, but nonetheless the gist is that these worms were found in her pool after cleaning it. The worms in question are gray in color, and noodle-like in shape. We must say, we have not seen worms that look like these before, so we were quite stumped by our first impression of this critter. Unfortunately, we are still not 100% certain what this creature might be, but we have two educated guesses.

The first guess is that these are horsehair worms. What makes this likely is the spot they were found in and their shape and thickness. Horsehair worms are parasites that develop inside the bodies of invertebrates such as cockroaches, beetles and certain crustaceans (they do not infect mammals whatsoever). Their eggs are laid in water, where they are then ingested by insects or crustaceans. Once the horsehair worm is fully developed inside its host, it bursts free through the body, killing the host. It usually does this when the host is back in another body of water, where the horsehair worm can live out the rest of its days as a free swimmer. For that reason, many horsehair worms are found in bodies of water. That said, what makes this identification unlikely is the size of these worms, as well as their numbers. Horsehair worms tend to be quite long, and two inches is short for them, especially considering they can reach 14-inches! Because of their length, they tend to tie themselves into knots, thus earning themselves the nickname ‘Gordian worms’ (named after the myth of the Gordian knot). We thought this might be what we were looking at, at first, but quickly dismissed the idea. Not only do the worms in this photo look separate and not like one long worm, but our reader herself confirmed that they are multiple short worms.

The second guess is that these are some type of roundworm, which we find more likely. Roundworms, otherwise known as nematodes, are round-bodied worms that can be either free-living or parasitic. The term ’roundworm’ is quite broad, as it encompasses an impressive 80,000+ number of species. As there are so many species, we would not be able to pinpoint exactly which species the worms our reader found belong to, provided that they actually are roundworms. There are both terrestrial and aquatic roundworms, so finding them in one’s pool is not impossible. Body size and length varies between species, but they definitely can be the size of the worms pictured above. A fun — but disturbing — fact is provided by Dr. Colin Tidy at Patient.info’s page on roundworms, who says that roundworms “vary in length from several millimeters to up to two metres”, though other sources have argued for even greater lengths. Furthermore, roundworms are equipped with entire digestive systems, reproduce sexually and will feed on decaying organic matter, bacteria and fungi (at least in the case of the nonparasitic roundworms). If the worms our reader found are roundworms, this might explain their presence in the pool.

In conclusion, we are not quite sure what it is our reader found in her pool after vacuuming it. Out of our two guesses, we are more likely to suggest that these are roundworms. For that reason, we urge our reader to be cautious if and when handling them, as certain species are parasitic, as we mentioned. In fact, we would suggest not directly handling them at all if she can avoid it. If any of our other readers have any other ideas as to what these worms might be, they are more than welcome to share them in the comments section below!

Article Name
Noodle-Like Gray Worms in Swimming Pool May Be Roundworms
Description
"I just found these after vacuuming my pool" says this reader about a tangle of gray worms pictured below in the photograph our reader sent us. "They are quite long and active" and are "at least two inches" in length. "What are they?" our reader asks.
Author
Worm Researcher Anton
Comments: 0 Posted by: All About Worms Categories: Marine Worms, Parasite Worms, Round Worms