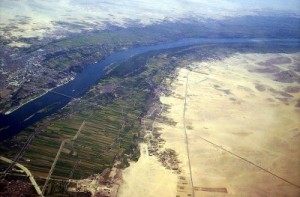 Unfortunately, this is an extremely difficult question to answer, as we are given no information about the worm other than that it is found in the Nile River (and presumably elsewhere) and that it lives in the water. About the only thing we can say with any degree of certainty is that the reader appears to be after some sort of aquatic worm, as aquatic worms live in water (as their name makes clear). However, this supplies the reader with essentially no information, as she is already aware the worm lives in water. This is, indeed, all she knows about it.

The only other possibility we can come up with is that our reader is referring to one of the several species of trematodes that cause Schistosomiasis, the most destructive parasitic disease in the world save malaria. Tramatodes are flatworms, which means they belong to the phylum Platyhelminthes. The tramatodes that cause Schistosomiasis belong to the genus Schistosoma in particular and are often called blood-flukes. They are prevalent in several regions of the world and do live in the Nile River. The parasites will infect snails, which they use as an intermediate host, and in turn the parasites will infect humans by directly penetrating their skin.

To conclude, we are unsure what Nile River worm our reader is looking for. We put forward a couple of possibilities, but one doesn’t live in the Nile River and the other is a very small parasitic worm that is almost exclusively known as the cause of Schistosomiasis. The fact that the members of the genus Schistosoma live in water is certainly not their most notable feature, and thus it would be unusual to dwell on their aquatic nature as their defining characteristic. If any of our readers happen to be Nile River experts and have some idea of what our reader is looking for, please leave us a comment.

This many people searched for this info: 2,728