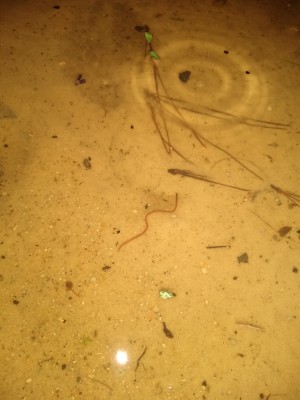 A concerned mother wonders if this worm pictured below is harmful to her two year old son. The worm appears thin and long, and although its coloration is difficult to tell from the photograph, we would propose that it is pink or tan in color. 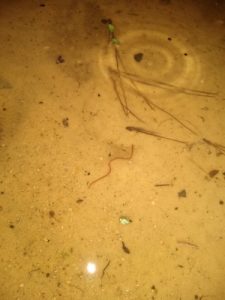 At first glance, we were not sure what to look for in the collection of photographs our reader sent to us. The worm is seen slithering between what we assume to be twigs and strands of grass, which makes it difficult to tell the worm apart from its surroundings. In addition to this, our reader did not provide us with any details as to the location of the worm, but as she is concerned for her son, we will make another assumption and guess that it has to be somewhere in or around our reader’s home. In one photo (see image below), one can make out a reflection and ripples on water in the top right corner, which may indicate that this was taken somewhere outside after it had rained. Of course, this is all guesswork. 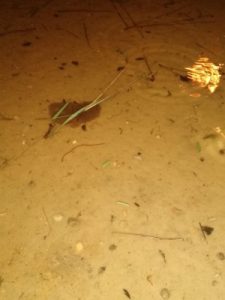 Based on this worm’s appearance, as well as its presence in a body of water, we would venture to say that this is a horsehair worm. These hair-like worms live in bodies of water, searching for insects and other small creatures to feed off of, specifically in a parasitic relationship. Horsehair worms are parasites, and burrow into the bodies of creature such as grasshoppers, cockroaches, and centipedes. With the exception of a few anomalies, horsehair worms are not known to be parasitic toward humans, pets, or plants, so our reader needs not worry.

Horsehair worms can grow up to 24-inches, but can be as small as 4-inches. Although these images can be confusing to look at, they do provide size comparisons for the worm, which tells us that this worm is not that long. However, it is fully grown. Horsehair worms only grow to their mature form inside the body of a host, feeding off the nutrients that the host consumes. Once fully grown, they break out of the body, becoming free to live on their own. Their name, ‘horsehair worms’, originates from a rather ridiculous myth that this worm forms from the thin hairs of a horse’s mane and falls into water as the horse drinks. Additionally, these worms are often better remembered by the way they writhe about in water, tying themselves into ball-shaped knots, thus giving them their alternate name, ‘Gordian worms’, based on the Greek myth of Alexander the Great cutting through the Gordian knot.

Nonetheless, despite horsehair worms posing no threat to humans, we can understand that our reader may not want to have these in the vicinity of her home. Although we are not sure where these photos are taken, the environment looks like it could do with some cleaning. Consistent housekeeping, as well as proper ventilation, is important to preventing infestations of all sorts of insects and creatures. In regards to horsehair worms specifically, although this will apply to many insects (especially those that fly), we encourage our reader to ensure that all cracks in her home’s walls and floorboards are sealed, as well as that her window screens are not torn, but in good shape. This is because insects that are hosts to horsehair worms can invade one’s home, thus bringing with them the horsehair worms, which then escape their host. This has happened on multiple occasions, especially in cases where people flush insects down the toilet that are hosts, and later find a horsehair worm in their toilet.

To conclude this article, our reader has seemingly found a horsehair worm, but although this worm is considered a parasite, she needs not fear for the safety of her two year old son. We recommend maintaining a clean environment in the home to prevent further visits from other unwanted creatures, and not flushing insects down the toilet!

Article Name
Mother Fears for her Two Year Old Upon Finding a Horsehair Worm
Description
A concerned mother wonders if this worm pictured below is harmful to her two year old son. The worm appears thin and long, and although its coloration is difficult to tell from the photograph, we would propose that it is pink or tan in color.
Author
Worm Researcher Anton
Share the knowledge