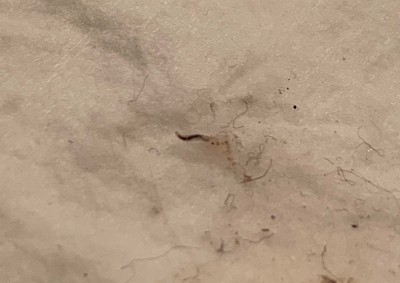 Minuscule Worms on Desk in Alabama are Flea Larvae

Recently, one of our reader’s in Alabama sent in this picture of a tiny worm she found on her desk that her cat sleeps on. She found four of the same type in one day, which appear to be translucent in color, with a black stripe on the inside that runs the length of their bodies. In comparison to the strands of hair on the picture, this worm is minuscule in size. 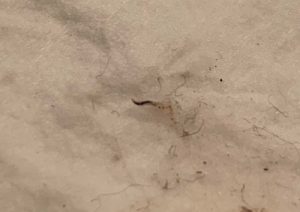 To begin with, we want to thank our reader for sending in a clear picture, as this makes it easier to identify the worm. In fact, it only took us a second to identify this critter, given that we have written about this worm several times; this worm is a flea larva. The worm’s size, location of discovery (a place that an animal frequents), and its physical characteristics yield this conclusion. Flea larvae are the larval stage of fleas. These creatures are an external parasites that feeds off the blood of animals, and commonly attach themselves to pets, such as cats, dogs, rabbits and mice. They can be a great nuisance to one’s animals, causing irritation of the skin and swelling. However, flea bites can do more harm than itching.

Fleas have been known to carry dangerous pathogens that can cause blood-borne diseases if transmitted to a host. This is a result of fleas biting other animals that carry the actual disease, and then biting another host and regurgitating their infected blood onto the wound. In fact, fleas were partly responsible for the transmission of the bubonic plague during the Black Death, a historic tragedy in the 1300s where 20 million people across Europe died. While it was originally carried by rats, it was the fleas who fed off the rats which then spread the plague further. 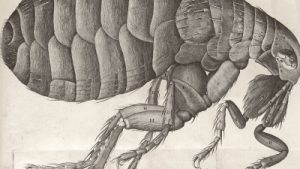 Now, while this story is quite horrible, the chances of fleas carrying the bubonic plague today are slim. While it is still present today, the development of modern medicine has made the disease rare, especially in first world countries like the United States. Nonetheless, we want to caution our reader that fleas are not to be taken lightly, and should be dealt with immediately upon discovery. But typically, fleas will only cause the aforementioned irritation and swelling, and our reader needs not stress about her cat contracting a deadly plague.

Luckily, the flea larvae our reader found were only in their larval stage. It is curious that our reader discovered the worms on her desk, as opposed to a damp and dark location, which is typically the type of environment flea larvae prefer. A possible, but unfortunate explanation for this would be that our reader’s cat is already infested with fleas, and the larvae found on the desk, where the cat sleeps, came from the fleas already on the cat. It is unlikely that the flea larvae crawled up on the desk, as their diet consists of dead insects, faecal matters, and vegetables. We encourage our reader to consult with a vet immediately to have her cat checked and treated for fleas.

In regards to the fact that our reader’s cat never goes outside, it is possible that the fleas crawled in from the outside, through a crack or window. For this reason, we recommend sealing all cracks in the home where creatures can crawl through, and ensuring that all bug screens are intact and in good quality. In addition to this, we recommend that our reader search every dark and/or damp location in her home to check for more flea eggs or larvae, and that she vacuums these areas, if not her entire house. They will be extremely difficult to spot, given their size, so perhaps a magnifying glass might be of assistance to our reader as well.

In conclusion, the worm that our reader found on her desk was a flea larva. While they posed a great threat in the 1300s, today, fleas are considered nothing more than pests, but should still not be taken lightly! As previously stated, we recommend that our reader takes her cat to a vet to have it checked and treated, and also that she vacuums her house for any flea eggs or larvae. If our reader wishes to read another article we wrote on flea larvae that contains some different information, she is welcome to. Otherwise, we wish her the best of luck.

Article Name
Minuscule Worms on Desk in Alabama are Flea Larvae
Description
Recently, one of our reader's in Alabama sent in this picture of a tiny worm she found on her desk that her cat sleeps on. She found four of the same type in one day, which appear to be translucent in color, with a black stripe on the inside that runs the length of their bodies. In comparison to the strands of hair on the picture, this worm is minuscule in size.
Author
Worm Researcher Anton
Comments: 0 Posted by: All About Worms Categories: Worms Facts, Worms Found in the House, Worms Generally