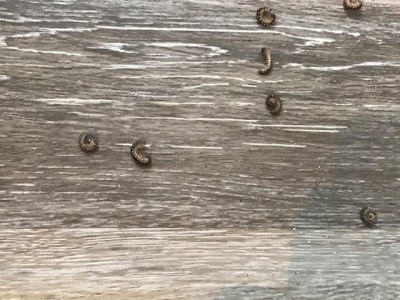 One of our readers returned from vacation to find her basement floor scattered with mysterious worm-like organisms. She said there are creatures everywhere, but the largest quantities were near the fireplace (gas, no chimney) and the window well. She wants to know what the specimens are, if they are dangerous towards children or animals, and how she can get rid of them. This is the picture she sent us along with her message: 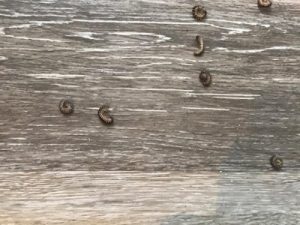 The creatures in question are small with brown, segmented bodies. As you can see, several of them are curled up into tight spirals. We believe these are millipedes! Millipedes aren’t actually worms, they are arthropods. They are sometimes confused with centipedes (also arthropods) since both have segmented bodies lined with tiny legs. Millipedes have rounder bodies than centipedes and have two pairs of jointed legs per body segment (centipedes just have one pair per body segment.) Millipedes are also known to curl their bodies up as a defense mechanism. Although we can’t exactly see the legs on the creatures in this photo, we are still confident that these are millipedes!

Millipedes prefer to live outside and aren’t typical household pests. While they do sometimes get into the homes of our readers, they don’t cause as much destruction as some other creatures and they aren’t too difficult to get rid of. Millipedes eat leaf litter, decaying wood, and other debris. We don’t know why these millipedes are camped out in our reader’s basement, but we can advise her on how to get rid of them. She should sweep up all of the creatures and put them outside of her house as far from the entryways as possible. Next she should thoroughly clean her basement to clear away any potential food sources for these arthropods. She should be sure to sweep, dust, and vacuum and clear any cobwebs or other debris. The most crucial step though will be sealing up any potential entry points that these creatures might have snuck in through. She should check the window well where she found numerous millipedes to make sure that it is properly sealed. She should also check any vents and doors that might have small gaps where the specimens could have crawled in through. Sealing up these entry points will also prevent more millipedes from visiting in the future. There are a few other things she can do to prevent more visits from other small creatures down the line. First, she can keep her basement debris-free and install a dehumidifier which will reduce the moisture levels in her basement. Both of these steps will help her maintain an environment in her basement that isn’t as welcoming to millipedes. She can also clear the sidewalks and patios around the perimeter of her home, sweeping away wood chips and leaves. This will keep millipedes further from her home and reduce the possibility of them accidentally sneaking in!

In summary, a reader came home from her vacation to find her basement crawling with millipedes. Luckily, these specimens are fairly easy to say goodbye to and aren’t dangerous towards humans or pets.

Article Name
Millipedes Take Over Basement During Reader's Vacation
Description
A reader came home from her vacation to find her basement crawling with millipedes. Luckily, these specimens are fairly easy to say goodbye to and aren't dangerous towards humans or pets.
Author
Dori Franklin
Comments: 0 Posted by: Worm Researcher Dori Categories: Centipedes and Millipedes