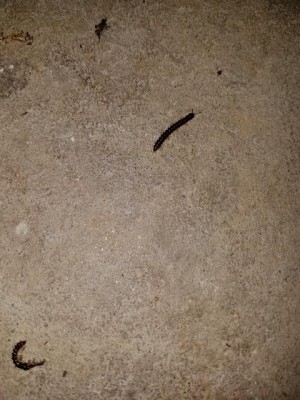 We just heard from a reader who discovered tons of critters inside his home. When he went outside, he noticed that the creatures were also all over the outside of his house. He believes the creatures are millipedes. Also, he thinks they might be congregating on his brick wall (which is south facing) and in his basement because these environments are warmer than the unseasonably cold (50 degree) weather. He wants to know if the creatures are indeed millipedes, and also if they will damage anything inside his home. Finally, he wonders if there are any good ways to keep them away. Here is the photograph he sent us: 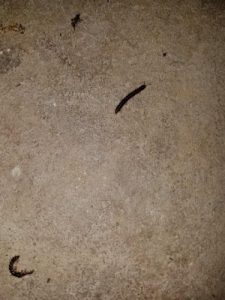 These are indeed millipedes! Hats off to our reader for his arthropod identifying skills! We recognize these critters by a few of their characteristic features. First, their dark color and segmented bodies. Second, we noticed their antennae and legs. Millipedes have two pairs of jointed legs per body segment. Finally, millipedes curl into a C-shape as a defense mechanism, which is what the millipede in the bottom of the photograph appears to be doing.

We can’t say for certain why these millipedes have suddenly appeared around our reader’s home, but his theory about it being warm in the unseasonable cold makes sense. The millipedes are probably sneaking in through smalls cracks in windows, doors, and/or vents. Since millipedes aren’t typical house pests, we don’t think they will do much damage inside his home. They aren’t like carpet beetle larvae that feed on clothing and carpeting. They usually eat decaying wood and leaf litter. In order to keep millipedes away, our reader will need to properly seal all doors, windows, and vents in his home. Also, he can make the area directly outside his house less hospitable to millipedes by sweeping up leaf litter and other debris.

In conclusion, a reader found his home suddenly serving as a guesthouse to several millipedes. To prevent future visits, he should seal all openings to his home and clear leaf litter and debris from his yard.