One of our readers who lives in Washington, D.C. found a small “worm” in her 10th floor apartment. She said that there is a small area outside that often collects water after storms and sometimes she has found bugs in this area. She found quite a few of these “worms” next to the window near her bed. She is not exactly sure how they got in. She does have a cat, so her first thought was that these worms could be infecting her cat. She also recently bought some sunflowers so she was thinking that worms could be on the flowers. Lastly, she did mention that she goes out horseback riding every day so they could have gotten in from her boots or clothing. She included a picture for us as well. 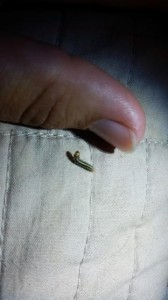 From looking at the picture, it is a possibility that this could be a small millipede. It does have segments of legs like most millipedes so this is very possible. If this worm is a type of millipede, it did not come from her cat and it is not a parasite living in the cat. She can rest well knowing that her cat is not sick.We emphasize “if” because we are not veterinarians, and not qualified to give veterinary or medical advice.  So if she had concerns that her cat could have worms or parasites, she should still take her cat to the vet.  We are only saying that millipedes do not come from cats.

Some bugs do like to go indoors when the weather changes or if there is a lot of rain in the area. If there was recently a storm in her area, this could be the reason the millipedes are coming in to her apartment. There is a possibility that these bugs could have come in from her clothing, but if there is more than one, that is probably not the case.

There is a possibility that the sunflowers brought the millipedes into her apartment, but they generally feed on moist and decaying plant life like dead leaves. Unless these flowers have a lot of dead leaves on them, she could probably write off this possibility as well.

In summary, our reader has found some worm-like bugs in her apartment. It is very possible that they came in because of the rain. They could possibly be millipedes that came in due to change in weather.

Article Name
Millipedes in Washington, DC Apartment
Description
One of our readers who lives in Washington, D.C. found a small "worm" in her 10th floor apartment.
Author
All About Worms
Comments: 1 Posted by: Previous Author Categories: Interesting Bugs