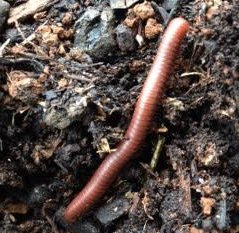 We received a question from a reader in Kauai, Hawaii about a creature with “little legs and antennas” that she found in a pile of tree mulch. (For the record, in the biological realm, the plural of “antenna” is “antennae,” which is confusing because for other uses of “antenna,” like for radios, the plural form is “antennas.”) The reader asked us for an identification, and we are virtually certain he found millipedes. Below we offer a few more details about millipedes and explain why we think this is what our reader found.

First, though, let’s take a look at the pictures the reader sent in: 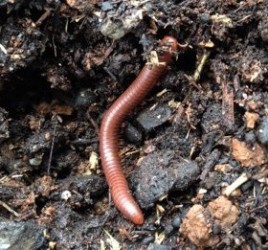 At first glance, it is difficult to see the “little legs” our reader refers to, but if you look closely, especially at the right side of the first picture, you will see them. The fact that these legs are hard to see is one of the reasons we think our reader found millipedes, and not centipedes, the other common bug with lots of legs. (Centipedes appear to be particularly abundant in Kauai, because when we searched for millipedes in Kauai, almost all the results were about centipedes, as if we had just used the wrong word in our search.) Centipede legs tend to be quite a bit longer than millipede legs, and they also extend fairly far beyond the centipede’s body. Millipede legs are much shorter and often can’t be seen at all if you look at the creature from above. Millipedes also have two legs per body segment (except for on their first three segments, where they have one pair), whereas centipedes alone have one pair per segment, although we can’t make out this level of detail in the image above.

We also can’t see the antennae of the millipede, but this is to be expected given their size and positioning on the millipede’s head, so all we want to note is that millipedes do in fact have antennae, just as the reader reported. (Centipedes also have antennae, but they are long and would therefore most likely be visible in the picture.) Finally, a pile of tree mulch is about the most classic place one could find a millipede since they feed on decaying organic matter. So, we have every reason to think our reader found millipedes.

As for the precise species, this is naturally much harder to say, as there are around 12,000 named millipede species. However, this number is much more limited on an island like Kauai, which obviously doesn’t contain every millipede species in the world. We weren’t able to find any list of millipede species in Kauai specifically, but we did discover that there is an extension program for the University of Hawaii at Manoa, which is located on Oahu, the island directly to the east of Kauai, and presumably they share some of the same animal species. In any case, some searching around the extension program’s site turned up the so-called “rusty millipede,” or Trigoniulus lumbricinus, which looks quite a bit like what our reader found. So, as a tentative identification, we think our reader found a rusty millipede.

Whether or not this is the correct species identification, we are very confident our reader found a millipede, and perhaps this is all he cares to know. If he wants to look further into the matter, he can research our suggestion a bit more, and he might also see if he can turn up any information on the exact millipede species that are found on Kauai.

Article Name
Millipedes in Hawaii
Description
We received a question from a reader in Kauai, Hawaii about a creature with "little legs and antennas" that she found in a pile of tree mulch.
Author
All About Worms
Comments: 0 Posted by: Worm Researcher Evan Categories: Interesting Bugs