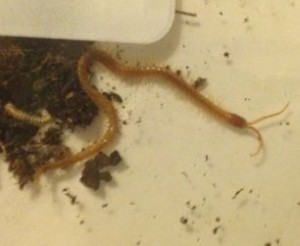 We received a very interesting question from a reader a little while ago about what appears to be a centipede or millipede (but probably a centipede). The millipede/centipede is long, a tan or brownish color, and has large antennae. The reader sent a picture of the creature, and also sent a picture of a tree that has been damaged, but in a highly intricate and patterned way. The tree almost looks like a maze or puzzle because the bark is covered with interconnected shapes. The reader was wondering what kind of creature she found, and she was also wondering if whatever it is was responsible for the artistic tree damage.

First, here is the picture of what appears to be a centipede or millipede:

It is difficult to see, but this creatures appears to have tons of legs that run along the course of its entire body, which is the classic mark of millipedes and centipedes. Millipedes have two legs per body segment (except for the first three segments, which have a single pair each), whereas centipedes have only one per body segment, but unfortunately we are unable to discern this level of detail in the picture. However, we can tell that the antennae are long, which is generally a characteristic of centipedes, and we can also see that the creature’s legs extend a bit from their bodies, a feature that is also associated with centipedes. So, we think this is a centipede. We cannot, however, offer an identification of the precise species. There around 8,000 species in the class Chilopoda, which centipedes make up, so they are a relatively diverse creature, and we also have no idea where our reader lives. Centipedes are found all over the world, but the same types of centipedes are often limited to particular regions, so our reader should research the centipede species wherever she lives if she is inclined to figure out the exact type she found.

Now, on to the tree damage, which can be seen in the other image the reader submitted to us: 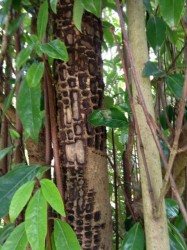 We have never seen tree damage like this before, and in truth we do not know what could have caused it. A broad range of creatures, ranging from tiny insects to large animals, can damage trees, and it can be difficult to determine what is causing the issue on the basis of the damage alone. Whatever is responsible for the damage inflicted on the tree above depends, again, on where our reader lives. It looks to us a bit like squirrel damage based on our research, but we definitely aren’t certain of this. In any case, it seems unlikely that the centipede our reader found could have caused this damage. Centipedes live in moist environments – in soil, under dead wood, and so on – because their bodies are subject to desiccation, so they would have little reason to climb around trees. Most centipedes are carnivores (they primarily eat soft-bodies creatures, like earthworms), so they wouldn’t feed on a tree or its bark either. Thus, it is hard to see how the creature our reader found has any connection to the tree damage.

So, we are reasonably confident our reader found a centipede, but we have less to say about the tree damage. However, if our reader did in fact find a centipede, we think it is unlikely that it is responsible for the pattern on the tree.

Article Name
Millipedes, Centipedes, and Intricate Tree Damage (Amazing Pictures)
Description
We received a very interesting question from a reader a little while ago about what appears to be a centipede or millipede (but probably a centipede).
Author
All About Worms
Comments: 0 Posted by: Worm Researcher Evan Categories: Worms Generally