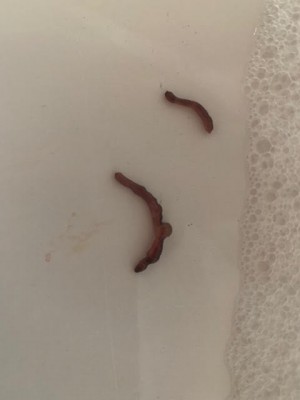 Methods of Dealing with Worms Coming Out of Faucets

Several gray-brown worms were found by this man’s son in their bathtub after not having been home for several weeks. Our reader, who is based in a basement apartment in London says he would appreciate any thoughts on what the worm is, how it got there, and how to prevent their return. 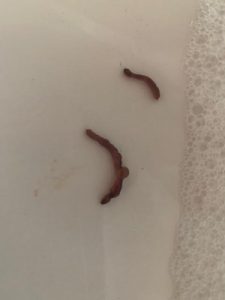 Firstly, we want to thank our reader for the array of pictures he sent. We get up close pictures like the one above, as well as far off photos like the one below, that give us a size comparisons, which makes it easier to get an idea of the physicality of these worms. Secondly, our reader describes these worms as being ‘slug-like creatures’, and although it is not unheard of for slugs to crawl up drains, these worms do not resemble slugs. Furthermore, the apartment he lives in has mild damp conditions, and is in a building consisting of multiple floors. Despite all of the apartments within the complex accessing “the same water supply”, our reader claims that no one else in his building has had the same problem. This is quite a curious case, and this last detail makes it difficult to figure out where the worm came from. One would think that if everyone’s water came from the same source, that all the residents of the apartment complex would have experienced the same problem. 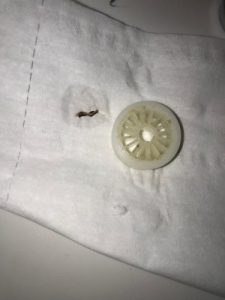 Likewise, these worms do not resemble any of the common worms that tend to come out of people’s faucets, which include drain fly larvae, midge fly larvae, and roundworms. And upon researching for various possibilities for what these worms could be, we did not stumble upon anything that remotely resembled these worms. For this reason, we unfortunately doubt that we will be able to confidently identify what has been coming out of this man’s faucets. However, we can give advice as to what to do in this situation. 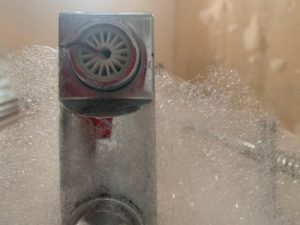 According to Osmio, one should run their faucet for 15 minutes and then contact their water company to report the incident and listen for the advice they provide on how to deal with the situation. Of course, it is possible they will not be able to give advice on how to deal with worm infestations, as they have most likely not been trained to deal with this specific of a situation. Normally, we are met with situations in which the worms our readers discover crawl up through the drain, and consequently we would recommend cleaning out one’s drains consistently for a while, but this situation is far more complicated. These worms are coming directly out of the faucet. There are filtration systems one can put in place in one’s faucets that can aid in preventing these situations, which our reader may wish to look into. Otherwise, it may be worth contacting another kind of professional who can identify the issue, perhaps pest control. 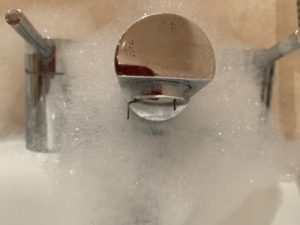 In conclusion, we are unfortunately not able to identify the worms coming out of this reader’s faucet. In spite of that, we hope that the methods detailed will be of help to our reader and that this issue may be resolved as soon as possible.

Article Name
Methods of Dealing with Worms Coming Out of Faucets
Description
Several gray-brown worms were found by this man's son in their bathtub after not having been home for several weeks. Our reader, who is based in a basement apartment in London says he would appreciate any thoughts on what the worm is, how it got there, and how to prevent their return.
Author
Worm Researcher Anton
Comments: 0 Posted by: All About Worms Categories: Worms Facts, Worms Found in the House, Worms Generally