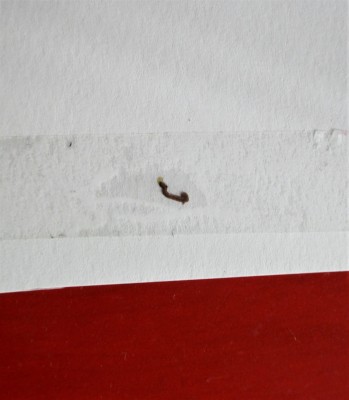 “The tiny thread-thin worm taped to the card […] was crawling, inch-worm-like on my bed comforter one night” says this reader, perfectly encapsulating her experience with the worm in the photo below. The “inch-worm-like” creature in the photo is a brownish-red color, is lying on its side in a shape that inchworms do make when they make their way across a surface, and is, from what we can tell, quite small in size. 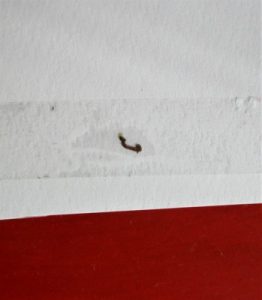 Our reader, who is in San Diego, reports feeling creeped out after finding this creature crawling across her bed comforter. She sent in an additional picture from the internet of a similar worm that she compared this one to, though we are not sure where she found the photo, so we can unfortunately not include it. But to sum up, it was a picture of a bright green inchworm crawling across a person’s finger, in its signature arched pose. It is then quite confusing when our reader goes on to say that, after having looked at our website, she thinks the worm she found is a clothes moth larva. We are not sure how she reached this conclusion, after having just compared it to an inchworm. In reference to a photo of a white sweater (which she did not send), she says that “luckily there was only one and not many” of the worm. She continues on by saying that from the “internet searching” she has done, the clothes moth larvae seem to be “much thicker” than the worm she found, so she wanted to check with us to be sure.

Well, to be frank, this is definitely not a clothes moth larva, but is more likely an inchworm, as that is what it resembles. Clothes moth larvae do not come in this color, are not as thin, and do not move in the same manner. Clothes moth larvae, of both the webbing clothes moth and the casemaking clothes moth, tend to be an off-white color, with a brown head. Now, one could argue that the term ‘inchworm’ is generally used as an umbrella term to encompass all North American moth species, and this is a point we brought up in a previous article focused on inchworms, so clothes moth larvae would technically be inchworms. However, now that we have time to think about the application of this definition, we do not think it is that accurate. This is because while ‘inchworm’ has been used to refer to all species of North American moths, it has likewise been used to refer to all caterpillars who possess front and back legs, but lack legs in the middle of their bodies, forcing them to scoot across a surface in the famous way that they do. Clothes moth larvae do possess legs, but they are located both in the front of the body, and in the middle of the body, and so the term ‘inchworm’ does not apply to them as they do not move in the same way.

Now, we cannot say for sure what species of inchworm our reader found. It is difficult to say when they are this young and small. However, we can assure her that it is not a clothes moth larva. Most species of inchworms infest trees, and will not eat one’s clothes, or in this case bed comforter, and so our reader does not have to worry about this critter being destructive, nor does she have to worry about infestation. We think it is likely that the inchworm either came in on something brought into the house, or that it crawled through a tear in a window screen, or through an open door. We recommend that our reader moves the inchworm outside as humanely, and cautiously as possible. Although we doubt this inchworm is venomous, one can never know if they will experience an allergic reaction or not upon touching any given creature. Thus, we advise that our reader wears gardening gloves, or some other form of protective gear, if and when handling the inchworm. Plus, we cannot say with 100% certainty whether or not this inchworm does possess venom, or has some form of defence mechanism, as we are not sure of its species.

To conclude, the worm our reader found on her bed comforter is an inchworm, though which species we do not know. What we can say for certain is that it is not a clothes moth larva. We hope this puts our reader’s mind at rest, and that she can sleep easy, knowing that this creature is not eating up her comforter as she is doing so.

Article Name
Maroon Worm Found On Bed Comforter is an Inchworm
Description
"The tiny thread-thin worm taped to the card [...] was crawling, inch-worm-like on my bed comforter one night" says this reader, perfectly encapsulating her experience with the worm in the photo below. The "inch-worm-like" creature in the photo is a brownish-red color, is lying on its side in a shape that inchworms do make when they make their way across a surface, and is, from what we can tell, quite small in size.
Author
Worm Researcher Anton
Share the knowledge