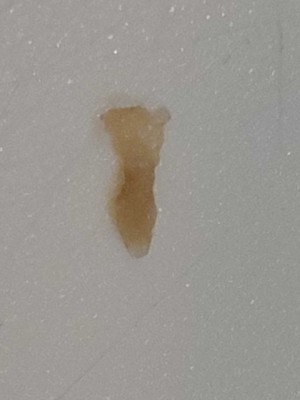 Man Wonders if the Featureless, White Matter from Pork is Fat or an Organism

“I’m guessing it’s fat” states this reader about the matter in the photo below which “rolled out on the knife” after cutting some ham. Despite this guess, our reader is unsure if it could be something else, and asks if we can confirm this as he has “a lot more meat from the same animal.” 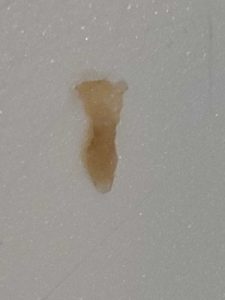 Our reader ordered the pork from a local farm in the Shenandoah Valley area. The ham “included the knuckle joint of the bone”, and was previously frozen before “cooked to temp away from the bone.” He reports that the temperature of the meat closer to the bone was “only 130-135” degrees. Additionally, “it was only 1.8 lbs because of how it was cut.” Our reader states that the inclusion of these details is important because the matter in the photos was found closer to the bone, and although it “could very well be fat”, the meat close to the bone was not cooked all the way through, but just looked like it was. Likewise, the piece of fat “seemed to be on its own” and he thinks it “odd” for “a random piece of fat to be in a slice of ham there.”

We understand our reader’s concerns, as eating under-cooked meat poses plenty of risks. One of these risks, which we assume our reader is trying to get at, is the presence of parasitic organisms. If the matter in the photos was to be anything, it would most likely be a fluke, which is a dangerous parasite that is relatively featureless (physically speaking) like the object in the photos. Now, we cannot confirm or deny if this is a piece of fat or a fluke (or something else). Its lack of distinct features makes this virtually impossible. Regardless, we are not qualified to give concrete identifications of parasites, as their presence often induces situations which are medical in nature, and we are not medical professionals. The only reason we were able to suggest that this might be a fluke, were it to be a parasite, is because our reader has not reported experiencing any symptoms or thinking that he is infested with a parasite. Additionally, the matter above was not consumed, as far as we know, but was kept separate from the meat. Of course, that does not mean that eggs could not have been laid on the meat. So either way, we will not and cannot directly say if this is a fluke or some other type of organism.

What we will say is that what is important in this case is not the temperature at which the meat was cooked, nor the weight of the meat, but the fact that the meat was frozen prior to it being cooked. If meat is frozen for more than 15 hours at temperatures below -35°F, then any parasites and their eggs will have been eliminated, making the meat safe to eat. The other factors would definitely have been more important were the pork not to have been frozen beforehand, but luckily, in our reader’s case, it was. That said, should our reader suspect that he, or anyone else, is developing symptoms because of the ingestion of this meat and would like to consult with a physician, then what we can recommend is that our reader do one or more of the following: 1) Search for a medical parasitologist in his area using this directory of medical parasitology consultants: https://www.astmh.org/for-astmh-members/clinical-consultants-directory. 2) Search for a local parasitologist by doing a Google search for “medical parasitologist (name of the closest big city)” or “tropical medicine specialist (name of the closest big city)”. 3) Get in touch with Dr. Omar Amin at the Parasitology Center at https://www.parasitetesting.com. 4) Contact Dr. Vipul Savaliya of Infectious Disease Care (“IDCare”) at idcarepa.com.

In conclusion, we cannot concretely answer whether or not the object in our reader’s photos is a piece of fat or an organism. Nonetheless, we hope that the information that is provided in this article proves helpful to our reader and we wish him the best!

Article Name
Man Wonders if the Featureless, White Matter from Pork is Fat or an Organism
Description
"I'm guessing it's fat" states this reader about the matter in the photo below which "rolled out on the knife" after cutting some ham. Despite this guess, our reader is unsure if it could be something else, and asks if we can confirm this as he has "a lot more meat from the same animal."
Author
Worm Researcher Anton
Comments: 0 Posted by: All About Worms Categories: Parasite Worms, Worms Generally, Worms in Humans