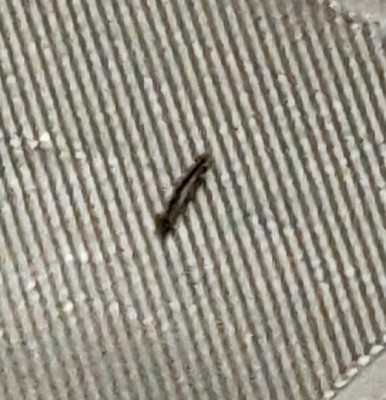 A man found a “worm/larva” on his table and hopes that we can help identify it. Although it is difficult to tell from the photos provided, the worm appears to be white with a black stripe down its middle, and is either flat in shape, or has been flattened by something. 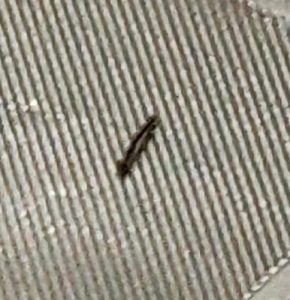 It will unfortunately not be possible for us to provide a confident identification. It almost resembles a blue planarian flatworm, albeit a smaller, perhaps younger form of one. However, a blue planarian flatwom is black (or dark blue, in certain lighting) with a white stripe down the middle, while this worm seems to have those two colors inverted. Though, from the second image below, it is difficult to tell if that is the case. Furthermore, blue planarian flatworms are mostly found in tropical forests, and is most common in Oceania, though it has been artificially introduced to other parts of the world such as France, the Canary Islands, and the United States. Yet, without the finer details that a high resolution photo would provide, we become unaware of the potential unique characteristics that might inform us about the species of insect or worm, and consequently it becomes almost impossible to tell what the creature is.

In order for our reader to obtain a more accurate identification, there are various methods he can reach for. First off, he could put the worm in a container with air holes and food in it and wait to see what it might grow into. Following that, our reader may send more pictures and information to us so that we can better help identify the creature. Secondly, he could take the worm to his local county extension office to get it identified, or thirdly take the worm to the nearest university’s entomology department. Although entomologists specialize in insects specifically, and we are not sure whether or not this creature is an insect, they may nonetheless be able to provide some clues as to the identity of the worm.

To conclude, we cannot provide a certain identification of the worm our reader found on his table. However, we are sure that if our reader adopts one or more of the methods listed above that he will be able to come to a conclusion as to the identity of the worm. Lastly, if any of our other readers have any idea as to what this worm might be, or they have other ideas as to how to go about identifying the worm, then they should feel free to comment down below.

Article Name
Man Discovers Small White Worm with Black Stripe Down its Middle
Description
A man found a "worm/larva" on his table and hopes that we can help identify it. Although it is difficult to tell from the photos provided, the worm appears to be white with a black stripe down its middle, and is either flat in shape, or has been flattened by something.
Author
Worm Researcher Anton
Comments: 0 Posted by: Worm Researcher Anton Categories: Flatworm, Worms Found in the House, Worms Generally