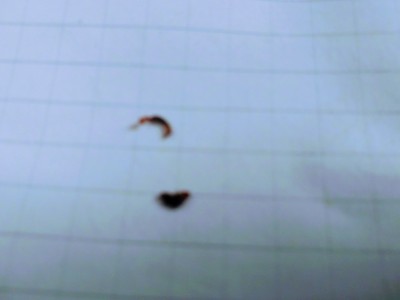 “This one worm with the hook on it came out of his nose, the other one that had 2 in it came out of a sore in my leg,” this reader writes to us. She wonders if we can tell her what these worms are. 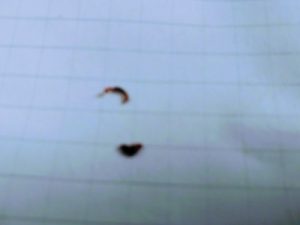 The sentence quoted above is the only context provided, so we do not know who our reader is referring to when she mentions the one worm coming out of “his nose”, but we assume the photograph pictured above is of that particular worm, seeing as one can make out a black, hook-like protrusion from one end of the organism. Our reader has also included other photos, which we must warn can be somewhat upsetting to sensitive eyes. That said, all of the photographs are quite blurry, which is unfortunate, depending on who you ask. For us, it makes it more difficult to discern the finer details of the organisms’ bodies. Nonetheless, this situation is medical in nature, and so we suppose the resolution of the photos is of less importance than it usually would be. This is because, as the situation is of a medical nature, and we are not medical professionals, we are not qualified to identify the organisms for our reader, as that would be tantamount to providing a diagnosis. What we can do in this situation is point our reader in the right direction of where she can go for help.

To begin with, she could visit her GP/doctor, though we know from many of our other readers’ experiences that this can turn out to be a waste of time. Many of our readers, who have gone to see their doctor after finding worms (or some other kind of organism) coming from their bodies, have been turned away and told that they are delusional. Although delusional parasitosis is a real condition, by which one is convinced one is infested with parasites when one really is not, most doctors do not make this diagnosis confidently but rather because they actually do not receive training in parasitology. For that reason, we tend to recommend that our readers instead seek physicians who specialize in these types of infections. In this field, there too are multiple options for our reader.

If our reader wants to have an in-person consultation with a physician, she can find one in her area by either doing a Google search for “medical parasitologist (name of her closest big city)” or “tropical medicine specialist (name of her closest big city)”, or by consulting the ASTMH (the ‘American Society of Tropical Medicine & Hygiene’), which has a service that locates infectious disease physicians within the given area of the patient.

Alternatively, if our reader wants to use an online resource, or book an online consultation with a physician, the PCI (Parasitology Center Inc.) is a great resource for all things parasites. She will find that through their website she can order a comprehensive stool sample to test for any intestinal parasites and she can contact Dr. Omar Amin for any help relating to her problem, as well as for the man she mentioned in her query. 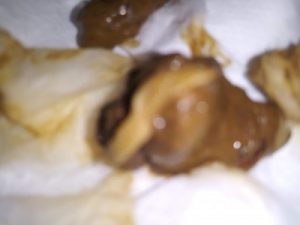 To conclude, all of this is not to say that our reader is definitely dealing with parasites, but seeing as these worms are coming from her — and this man’s — body, we think she will have the best chance of receiving help from an infectious disease physician. Whilst we are not able to identify these organisms, we hope that this article was still helpful to our reader and that she, and the man she mentioned, get the medical attention they need as soon as possible.

Article Name
Man and Woman Deal with Hooked Worms Coming From Nose and Sores
Description
"This one worm with the hook on it came out of his nose, the other one that had 2 in it came out of a sore in my leg," this reader writes to us. She wonders if we can tell her what these worms are.
Author
Worm Researcher Anton
Share the knowledge