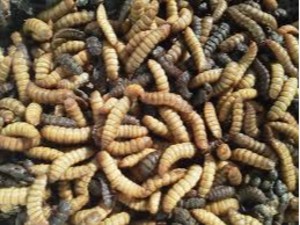 Maggots and BSFL Found Near Bin and Litterbox

A puzzling case of separate clusters of worms of different species was discovered by this woman and her caretakers in the UK. The first cluster of worms was found behind “the bin/cat food/litter,” and were deemed to be maggots, while the second cluster of unidentified worms, which were also found in the same place, were dark brown in color, and segmented.

Unfortunately, our reader was unable to provide photographs of the worms, as they were left out for the birds, but plenty of context and description was provided, and we appreciate that. According to our reader, there was only a few days between finding the maggots and then finding the dark brown worms. The worms were approximated to be between 1-2cm in length, and had a “hard carapace”, which is essentially a hard outer shell that acts like a shield toward predators. At first, our reader assumed they were BSFLs (black soldier fly larvae), but later ruled them out as these worms did not quite resemble them enough. Apparently, these worms’ segments were much closer together, and their “silhouette was smooth.” In addition to this, the worms did not curl up like millipedes, and neither did they possess legs. Our reader guesses that the maggots and these worms are related in some way, given the short gap between each cluster’s discovery, and adds that perhaps there is a chance that their appearance is linked to the type of cat litter they own (‘Cat’s Best’, which is grain-based).

Although our reader does not think that these worms are black soldier fly larvae, we would propose that that is the most likely creature to have been found near waste materials. There are not too many dark brown, segmented worms that do not have legs, feed on waste, and closely resemble BSFL, other than BSFL. Plus, not all black solider fly larvae necessarily look identical, and the relative ‘smoothness’ of their silhouettes could perhaps have been a product of how mature they were at the time of discovery.

Furthermore, technically speaking, the word “maggots” is an umbrella term for all fly larvae of multiple species, this includes the larvae of the bluebottle fly larvae (the white ones people most often associate the word ‘maggot’ with), and black soldier fly larvae. As odd as it is that maggots of different fly species were found in such a short period of time, it is not impossible. Both species of flies feed on waste materials, including food waste, and faeces, which would explain their attraction to both the bin and the litterbox. We would suppose that it was bluebottle fly larvae our reader found the first time, and then BSFL after. Perhaps the first maggots came about because a fly made its way into our reader’s home and laid eggs in her bin, and the bout of BSFL found their way in as eggs on the fur of our reader’s cat, and then hatched inside her litterbox, or vice versa? We were not informed whether or not the cat is let outside, so we are not certain how applicable that guess is, but it is one possible explanation of many.

In conclusion, we believe that the maggots and dark brown worms our reader found around her bin and litterbox were bluebottle fly larvae and BSFL. However, if these dark brown worms appear again, and our reader is positive that they are not BSFL, we encourage her to ask one of her caretakers to take photos and sending them to us for another look!

In case our readers have any other thoughts on what these mystery worms could be, here is our reader’s description:

“I have a real puzzle for you here. I live in the UK and, because I’m severely disabled, I have care assistants who help me with medication, food etc. A few days ago, one of these carers found a load of maggots behind the bin/cat food/litter. We couldn’t find any IN the bin, or anywhere else so she cleaned up everything she could find (and put them on the bird table for the birds.) Problem sorted, we thought. But today a different carer found something else in the same place. They are very dark brown and maybe 1-2cm in length, with a hard carapace. Immediate assumption would be black soldier fly larvae but there are things which, I think, don’t fit that category. As you know, BSFL have quite wide segments which appear to bulge outward between each joint, giving their silhouette a scalloped appearance. With the creatures we found, the segments are much closer together and, although the whole thing was substantially fatter in the middle, the silhouette was smooth. They didn’t exhibit any curling behaviour, I’m certain they weren’t millipedes, and there didn’t seem to be any visible legs.

Since the two “worms” appeared with so short a gap between them, it seems logical that they are related somehow but each time all indication of infestation was removed and the area cleaned and disinfected. I have heard, in the past, that grain-based cat litters (we are using Cat’s Best) can have problems with infestations but from what I have been able to tell, that is more usually something along the line of mites, not “bugs/ worms”.

I hope I have provided enough information for you. There would be a photograph but my care assistant put them on the bird table and, when we went back a few minutes later, they were all gone! I don’t believe they could have got off without assistance so I’m guessing they were a big hit with the local birds!”

Article Name
Maggots and BSFL Found Near Bin and Litterbox
Description
A puzzling case of separate clusters of worms of different species was discovered by this woman and her caretakers in the UK. The first cluster of worms was found behind "the bin/cat food/litter," and were deemed to be maggots, while the second cluster of unidentified worms, which were also found in the same place, were dark brown in color, and segmented.
Author
Worm Researcher Anton
Comments: 0 Posted by: All About Worms Categories: Black Soldier Fly Larvae - BSFL, Composting Worms, Gross Worms