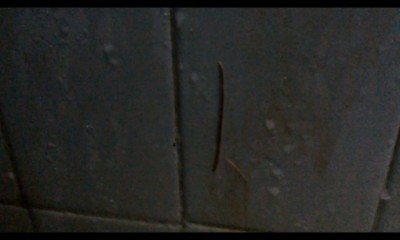 One of our readers found a long worm in her toilet. She claims to know that it is not an earthworm, and wonders how to get rid of it and if it is harmful to adults or children. The picture she sent shows a thin dark worm that could be a couple of centimeters or inches long. We say ‘could’ because we are basing the sizing off what an object that we don’t know the measurements: the tile square that the worm is lying on. She didn’t say if she found this worm before or after using the toilet, but we don’t think it resembles a parasite.

We are curious why our reader has ruled out the possibility that this creature could be an earthworm. The photo is pretty dark, so we don’t know the color of the worm, but based off of the other qualities, we think it is quite likely that it is in fact an earthworm. Readers find earthworms in their toilets fairly frequently, as they need a moist environment to survive. They sometimes end up in a toilet by accident, or through the plumbing system, and they are not harmful to humans.

If our reader definitely knows this isn’t an earthworm, we have a few other ideas of what it could be. It might be a millipede, but we don’t see segments or antennae on this creature. It also could be a bloodworm, which are also often found in toilets. However, they are usually smaller and thinner than the worm in this photo. If our reader sends us a clearer image, we will attempt to solve this mystery! Unfortunately, since we do not know for certain what the worm in the photo is, we cannot say for sure if the worm is harmful or not.

To summarize, a reader sent us a photo of a worm she found in her toilet. We think it could be an earthworm, but our reader disagrees. What else might this creature be?

Summary
Article Name
Long Worm in Toilet
Description
A reader sent us a photo of a worm she found in her toilet. We think it could be an earthworm, but our reader disagrees. What else might this creature be?
Author
Dori Franklin
Comments: 0 Posted by: Worm Researcher Dori Categories: Earthworms