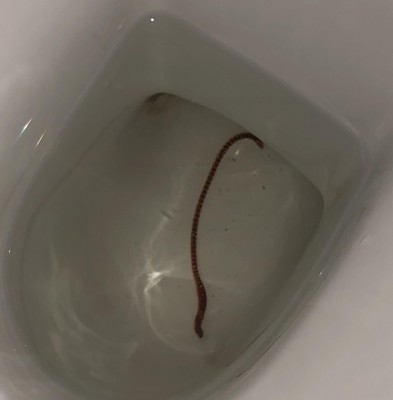 A worm was found in the toilet of this reader, alive, and she wonders if we could help identify it for her as she is “freaked” out. The worm in question appears to be red in color, with segmented stripes, and a long, smooth body. 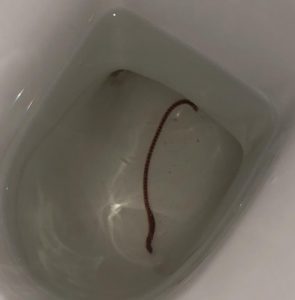 Given the worm’s appearance, we think this is a red wiggler worm. Otherwise known simply as a red worm or tiger worm, the red wiggler receives its name from its tendency to wiggle when handled. These creatures are composting worms, meaning they eat and decompose organic matter. In fact, red wigglers are a popular purchase for people owning composting toilets, as the wigglers are efficient in composting faeces. Red wigglers are neither parasitic, nor harmful in the least toward humans as they only feed on decomposing organic matter. Thus, our reader has nothing to worry about in terms of her health and safety.

Red wigglers have a fascinating anatomy. Most of their organ systems reside within the first few segments of their body, save the digestive system, and each of their segments perform various functions. Their head (where most of the aforementioned organs are located) is a make-shift shovel which they use to burrow underground, retractable bristles along their entire body aid them in moving about, which is then further helped by their skin’s secretion of mucus. Red wigglers are hermaphrodites, but are not asexual, meaning they still need a partner to mate. The resultant egg-filled cocoon can hold up to 200 eggs, but the standard amount is four. For that reason, one could suppose that infestations of red wigglers is possible.

This red wiggler likely found its way into our reader’s toilet due to a build up of decomposing organic matter, which is a sign of poor sanitation. Just like earthworms, which also find their way into people’s toilets commonly, this red worm likely found its way into the pipes or sewers when it was burrowing underground. We recommend simply moving the worm found outside, perhaps near a pond where there will be plenty of organic matter for them to feed off of. In terms of preventing more of these worms from appearing, simply keeping up a consistent housekeeping routine and ensuring the proper sanitation of one’s toilet will prevent the attraction of various species of worms that are attracted to unclean water, such as bloodworms, drain flies and more.

In conclusion, the worm our reader found in her toilet is a red wiggler worm. These worms are not harmful, but can be a sign of an unclean area, and so if our reader follows the methods listed above, we are sure that she will be rid of this problem in no time.

Article Name
Long, Striped Worm in Toilet is a Red Wiggler
Description
A worm was found in the toilet of this reader, alive, and she wonders if we could help identify it for her as she is "freaked" out. The worm in question appears to be red in color, with segmented stripes, and a long, smooth body.
Author
Worm Researcher Anton
Share the knowledge