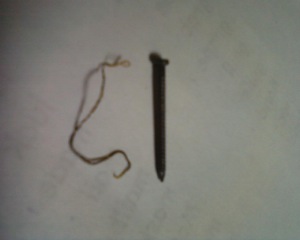 Long, Red Worms in the Toilet

We recently received a question through the All About Worms Facebook page about “two red worms in the toilet bowl.” The worms were “10 cm long, thin, like one millimeter in diameter, and alive, even in the water, they were still moving.” The reader didn’t actually ask for an identification, but instead asked if the worms might be parasites. This is his main concern, and we will focus on this question, although the answer is of course tied to what exactly the reader found, so we’ll touch on the matter of identification as well. What might the red worm in the toilet be, and are they parasitic?

Unfortunately, the reader didn’t submit a picture, which for obvious reasons is always helpful to have, but he did provide a reasonably thorough description of the worms in question. Assuming his measurements are accurate, the worm he found is extremely skinny (it is one millimeter in diameter!), particularly relative to its length, which is why we described them as “long.” And really the only worm we can think of that roughly possesses these body dimensions is a horsehair worm, and we have actually written about horsehair worms in toilets before. Horsehair worms are, well, hairlike, and long ago people actually thought that they were hairs from horse tails that had somehow come alive. They are often quite a bit longer than 10 centimeters (four inches), making their hairlike qualities even more apparent, but they could be in the 10-centimeter range. In any case, the length of the creatures our reader found pretty firmly establishes that they aren’t the type of insect larvae that one might more commonly expect to find in a toilet, like a moth fly larva. (We also have an article specifically about moth fly larvae in toilets.)

Again, though, the reader wasn’t particularly hung up on identification, so we’ll move to the question of whether he found something that is parasitical. Presumably, the reader is interested in the more specific matter of whether the worms he found are parasitical to humans. Horsehair worms are actually parasites (or technically parasitoids), but only to a few types of insects and crustaceans. So, if our reader found horsehair worms, he did in fact find a parasitical worm, but one that presents no threat to humans or pets (unless he has pet grasshopper or something). As far as whether our reader found a human parasite, we think this is unlikely because the types of worms that infect humans aren’t long skinny worms that you find alive in your toilet. If you find a worm in the toilet, the fear of course is that it somehow came out of you, but the only worms that can really come out of a person in this context (as far as we know) are pinworms and tapeworms, and we are pretty certain this isn’t what our reader found. As none medical professionals, we can’t offer anything like medical advice, so if our reader is concerned about a parasitical infection he should visit a doctor, but the mere fact that he found a worm in his toilet certainly need not be interpreted as a sign of infection.

So, to recap, we aren’t entirely sure what our reader found, but it could be a horsehair worm, and no matter what he found, it seems unlikely that it is a human parasite. Again, though, if our reader is concerned about an infection, nothing we say should deter him from visiting a doctor. We are merely pointing out the fact that people find worms and worm-like creatures in their toilets with some regularity, and these worms and worm-like creatures are not in our experience parasitical, at least not to humans.

Article Name
Long, Red Worms in the Toilet
Description
What might the red worm in the toilet be, and are they parasitic?
Author
All About Worms
Comments: 3 Posted by: Worm Researcher Evan Categories: Pest Worms