A reader wrote to us a while back about a long brown worm with black stripes that she found in a decaying stump. Fortunately, she sent us an excellent photo of the brown worm, which we were quickly able to identify as a hammerhead worm (sometimes understandably, but incorrectly, spelled “hammer head worm”). The reader was merely wondering what the long brown worm was, so we’ve technically already answered her question, but if we stopped writing now, we wouldn’t have a very satisfying article to read. So, below we supply some information about hammerhead worms, which includes the reader’s excellent picture.

Speaking of that picture, here it is: 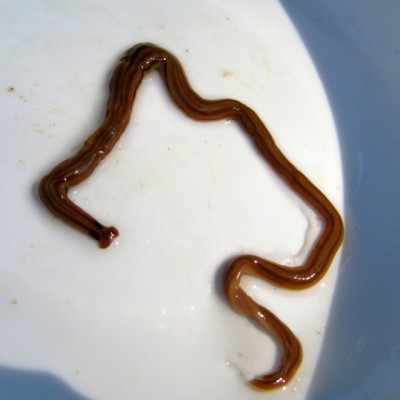 As you can see, the head of this worm is shaped a bit like a hammerhead, and hence its name.

We have been writing as if there is only one species of hammerhead worm, which isn’t the case. Rather, there are many different species – united by their hammerhead-shaped heads (among other things) – and together they make up the genus Bipalium. This genus is part of the family Geoplanidae, which is itself part of the phylum Platyhelminthes, the members of which are more commonly known as “flatworms.”

Hammerhead worms are interesting creatures, not least because of their thoroughly disturbing eating habits. They are carnivorous, with many species preying on earthworms in particular. To make a long story short, hammerhead worms will follow and then trap earthworms with their muscles and a sticky secretion. The hammerhead worm will then push its pharynx out of its mouth, thereby secreting enzymes on the helpless earthworm. These enzymes breakdown the earthworm into a liquid (meaning the digestive process is actually occurring outside the predator’s body), which the hammerhead worm sucks into its body. Given their eating process, you might think these worms are harmful to humans or pets, but this actually isn’t the case (unless you improbably have an earthworm for a pet, or unless you even more improbably regard earthworms as humans).

It is approaching notable that our reader even found a hammerhead worm because they are nocturnal, but they are sometimes out and about in the early morning hours too, which is perhaps when our reader was able to spot one. Like many other types of worms, hammerhead worms must live in moist environments, which probably explains why the reader found her worm in a decaying stump. Organic matter such as this is an inviting habitat for worms.

Hopefully we have answered out reader’s question (and then some). While we are sometimes uncertain about our identifications (in part because we often lack the information needed), but we are confident that our reader found a hammerhead worm in this particular instance. Everything checks out, and plus we have a picture to confirm our suspicions.