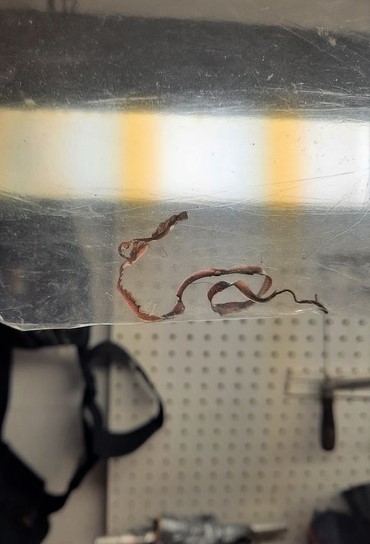 “Found this on my bathroom floor next to the toilet”, states this reader in her submission regarding the purplish-gray worm-like organism pictured below. “I don’t have a clue what it is but it’s creepy!” 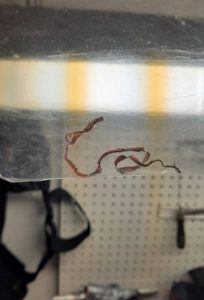 No further context is provided, but based on the photo, we think this is some type of flatworm. Flatworms are invertebrates (meaning they do not have a backbone) that are characterized by their flat bodies, which set them apart from the many other round, ‘tubular’ worms like the earthworm. There are over 20,000 species of flatworms, but the ones you will find referred to the most are tapeworms, planarian worms, New Guinea flatworms and hammerhead worms. We have covered all of these flatworms before, and they are all very interesting. Now, when it comes to the flatworm our reader found, we actually do not recognize this one. So, unfortunately we will not be able to say exactly what species it belongs to.

In any case, we suggest that our reader move this flatworm outside, as it likely found its way into her bathroom by accident. We advise using caution and avoiding making skin-to-skin contact; many species of flatworms are able to secrete a fluid which will cause stinging and/or irritation if one gets it on their skin. Additionally, this particular flatworm seems to have some spikes along its body, which may be bristles, which can cause similar pain and itching if one touches them. As such, using a dustpan and scooping the worm onto it with a stick (or something else long) is a good way to transport the worm without touching it.

To conclude, the long worm our reader found next to her toilet is a flatworm, though what species in particular we do not know. Regardless, we hope this article proves useful to some degree, and we wish her the very best.

Article Name
Long and Spiky, Purple-gray Worm Found in Bathroom is a Flatworm
Description
"Found this on my bathroom floor next to the toilet", states this reader in her submission regarding the purplish-gray worm-like organism pictured below. "I don't have a clue what it is but it's creepy!"
Author
Worm Researcher Anton
Share the knowledge

This many people searched for this info: 158