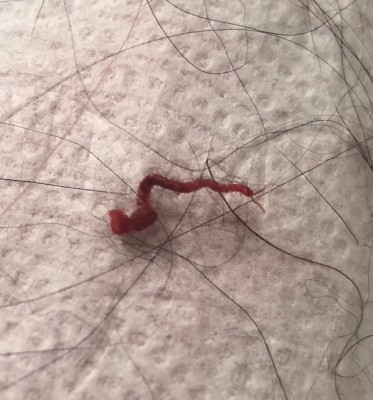 Little Red Worm Found in Bathroom is a House Centipede

A little, red worm was found by this man’s wife on the bathroom floor of their Texas home. According to our reader, the worm is about an inch long, and has antennae. 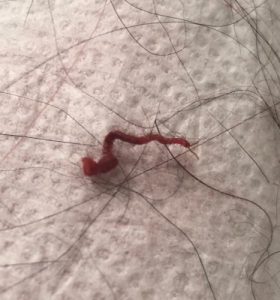 Our reader is concerned that the worm may have come from one of his dogs, and hopes that we can put him at ease. And indeed we can. Upon zooming on the excellent photograph our reader provided, it is clear to us that this is a centipede. This is made apparent by the creature’s many legs, after which the centipede gets its name (centipede roughly translating to hundred foot in Latin), as well as its antennae.

The centipede is a predatory invertebrate, and is a common phobia among people who do not like bugs in general. However, while certain species of centipedes can often pack a powerful bite and possess venom, the common house centipede (which this appears to be) are nothing to be feared by humans. Likewise, centipedes are not parasites, so our reader can rest assured that this critters definitely did not come from his dog. Furthermore, while other species of centipede can grow up to six inches, the house centipede tends to fall somewhere in between 1-1.5-inches. The fear of centipedes is understandable, given that they usually have fifteen pairs of legs, and can run at a speed of approximately 1.3 feet-per-second. That’s incredibly fast for such a little critter! Although one’s initial instinct would be to squash this creature, or at least get it out of one’s house, this bug is actually beneficial to keep around the house. Like the house spider, centipedes prey on many common household pests, such as cockroaches, mites, moths, flies, and more.

Additionally, keeping centipedes in your house is technically not even disadvantageous in the least, except for the gross/fear-factor. Centipedes do not leave behind webbing or nests, and are not known to be carriers of diseases, parasites, or pathogens. Naturally, we assume that most are not necessarily up for keeping a centipede as a pet, but the only way to properly get rid of them is to eliminate their food source, which is the pests they are taking care of for you in the first place. One could try to catch one of these critters, but given their size and speed, it is nearly impossible. To prevent the attraction of other said pests, and consequently the attraction of centipedes, it is vital to ensure that there is not a build up of moisture in the home. Installing dehumidifiers and/or fans in rooms (especially the bathroom) is a great way of ensuring that the moisture levels in one’s home are level and consistent. If our reader wants specific advice on how to deal with any of the common pests that he thinks might be infesting his home, he may feel free to contact us again.

To conclude, the “little worm” that our reader’s wife found on the bathroom floor is a centipede. It was likely there because it was preying upon other pests in our reader’s bathroom. While these critters are nothing to fear, we understand that our reader might not want to keep it around. Thus, if he follows the methods listed above, we are sure that he can be rid of both the centipede and the potential uninvited pests in no time.

Article Name
Little Red Worm Found in Bathroom is a House Centipede
Description
A little, red worm was found by this man's wife on the bathroom floor of their Texas home. According to our reader, the worm is about an inch long, and has antennae.
Author
Worm Researcher Anton
Comments: 0 Posted by: All About Worms Categories: Centipedes and Millipedes, Interesting Worms, Worms Found in the House