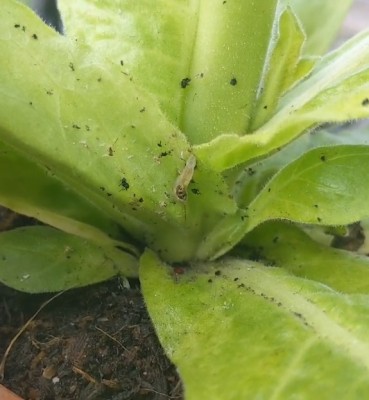 Little clear larvae were found on the underside of this reader’s Nasturtiums and Nicotiana plants on their balcony in Bristol, UK. “They are sticky and move like caterpillars” our reader reports, and they wish to know what they are and how to remove them. 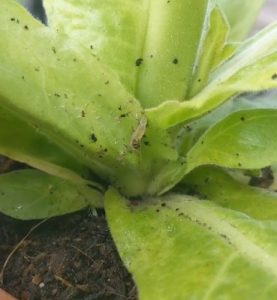 Later in their query, our reader elaborates by saying that the larvae move like caterpillars in the sense that they bunch up and then push forward to move along the surfaces of the plant. In addition to this, “they respond by contracting when touched.” The larvae are clear, with “visible internal organs” and measure approximately 0.5cm in length. Our reader has caught and relocated five of the larvae to the neighborhood park, but they are confident that they will find more of these and hopes we can provide a method of removing them more efficiently.

It turns out that this larva does not only move like a caterpillar, but it is one too! The larvae our reader has been finding are the caterpillars of the dark posy butterfly (Drupadia theda thesmia). The dark posy, a cousin of the common posy, is a black, white and orange butterfly that can be found in Singapore. Of course, our reader is based in the UK, but no source states that it is exclusive to Singapore, only that it can be found there. Oddly enough, there is very little information on the web about this butterfly; even its Wikipedia page is relatively bare. Horace Tan does an excellent job listing the life stages of the dark posy, as well as describing its physical characteristics and behaviours, but not much can be found about where in the world it can be found or its country of origin. Tan affirms that the butterfly can be found in Singapore, but that it is still rare there.

The dark posy is quite similar to the common posy, both in appearance and in terms of habitat, and the two species of posy often coexist in the same habitat. Hence, it could be that the dark posy is not actually that rare, but that it is just often mistaken for the common posy. Using this logic, it would also be safe to say that the common posy can also be mistaken for a dark posy, and thus it could also be that the caterpillars our reader found were common posy caterpillars. Either way, the two species are so similar that it likely makes no difference which species it is.

When it comes to removing the caterpillars more efficiently, our reader might want to go about adopting some preventative measures, so as to stop the caterpillars from even getting to their plants. There are several things one might try to prevent caterpillars, or any critter for that matter, from trying to eat one’s plants. One thing our reader can try is adding a little cayenne pepper to their water when they water their plants; this will discourage most creatures from eating one’s plant. Unfortunately, it can also kill whatever creatures are eating on the plant, if they end up chewing on it anyway. If our reader would like to avoid potentially having dead caterpillars in their plants, they can try spraying their plants with a simple solution of liquid soap and warm water. This will not kill any critters, but will make the surfaces of the plant slippery and difficult to climb, which will dampen their efforts to eat the plant. Sasha Brown from DreCampbell.com has written a comprehensive list on natural solutions to controlling caterpillars on plants, so if our reader would like a bigger variety of methods they can use, we recommend checking out this resource!

Article Name
Little Clear Larvae on Plants are Dark Posy Caterpillars
Description
Little clear larvae were found on the underside of this reader's Nasturtiums and Nicotiana plants on their balcony in Bristol, UK. "They are sticky and move like caterpillars" our reader reports, and they wish to know what they are and how to remove them.
Author
Worm Researcher Anton
Share the knowledge

This many people searched for this info: 526