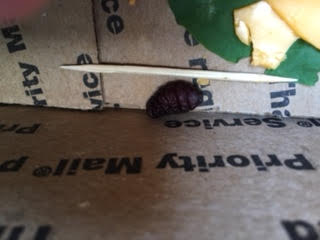 Earlier this month we heard from a reader in Ontario, Canada. She sent us the photo shown above accompanied by the following questions: What is this? Is it some kind of larva? She mentioned that it doesn’t have any legs, and that it moves like a caterpillar.

The creature in the photo has fat brown segments and looks a bit like feces. Using the toothpick in the photograph to determine size, we believe the creature is 1-3 centimeters long. Now on to our reader’s questions…this is a black soldier fly larva! So she was right, the specimen is a larva of some sort.

Black soldier fly larvae, or BSFL for short, mature into black soldier flies, which are common and widespread throughout most of the United States and parts of Canada. These larvae and flies are not considered to be pests or vector species, which means they aren’t known to carry any diseases.

Black soldier fly larvae are very popular in the composting community. In fact, those interested in composting sometimes purchase these larvae and build a colony to help their decomposition process run more efficiently. Black soldier fly larvae are excellent at breaking down organic substrates and returning nutrients to the soil and environment. They are similar to red wrigglers, which are also purchased and bred for composting purposes.

Our reader didn’t say where she found this larva. If it was in her home, she should check the trash bins near where it was discovered. She should empty them, and make sure the container is clean as well. It could have also entered by means of a dead animal that a pet dragged in, like a rabbit or bird. Since these larvae aren’t harmful to humans, she shouldn’t worry to much about finding the creature!

In conclusion, a reader asked us to give her some answers concerning  a fat, brown, worm-like organism she found. We believe the creature is a black soldier fly larva.