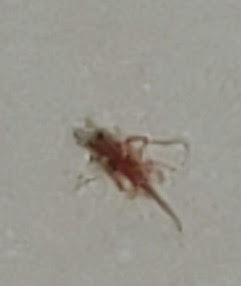 Recently we received a query about a “bug/parasite/worm” that one of our readers in Iowa captured, who went on to elaborate that there are “actually […] two different ones.” The first photograph looks to be some kind of pink creature, with long appendages that snake out from the main body, and the second image showcases what looks to be a tangle of dark brown/black colored worms. 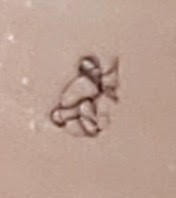 Our reader went on to say that they looked over some of our articles but was unfortunately unable to figure out the identification of the creatures they found based on our information. They are curious to see if we have any idea as to what these creatures may be and if we will be able to identify them. Well, first of all, we might as well start off by saying that we doubt we will be able to identify the creature in the first photograph, as the quality of the photo does not allow for proper identification; it is unfortunately too blurry. That being said, we do have an idea as to the identity of the second creature(s).

Given the appearance of the creatures in the second photograph, as well the fact that they all seem to be tangled together (though it is possible that it is just one long worm), we would suppose that these are horsehair worms, otherwise known as Gordian worms. In this case, it might be more appropriate to call them by the latter of the two names, given the state in which they were found. Gordian worms get their name from a Greek myth about a knot called ‘the Gordian knot’, which was supposed to be a knot so intricately woven that it was nearly impossible to undo. Likewise, Gordian worms tend to twist their bodies into knots. In some versions of the myth, Alexander The Great, a well-known hero from the Greek myths, simply slashes through the knot with his sword, and thus the expression ‘cut the Gordian knot’ was born. That is not to say we recommend slashing through a knot of Gordian worms with a sword!

Moreover, moving away from mythology, let’s address the worms themselves. Gordian worms are marine worms that have long, but incredibly slender bodies. People often mistake them for hair. They are parasitic in nature, but only to insects, so our reader needs not fear for their own health. The eggs of the Gordian worm are laid in a body of water. Upon hatching, it is thought — but not wholly agreed upon — that a larva of the Gordian worm creates a protective cyst around its body. Then, an unlucky insect will digest the larva. Following that, the larva’s cyst is broken down so that the larva may then burrow into the wall of flesh in the insect’s gut, where it can feed and mature. Once fully matured, the Gordian worm breaks free from its host, quite literally erupting from the body of the host and killing it in the process. After that, Gordian worms usually stay in the body of water the insect died in and repeat the process. Sometimes people will find Gordian worms in their toilets after flushing an insect down the toilet because the insect was a host to a Gordian worm.

Lastly, in regards to the creature in the first photograph, we wish to encourage our reader to take another photograph of it, perhaps trying to catch it in better lighting, and send it our way again. Unfortunately, the photograph provided is just too blurry to make out any details that would aid us in identifying the creature. Alternatively, our reader could take the worm to their local county extension office or to the entomology department at a nearby university to have it identified. If our reader has cause to believe that it is a parasite (ie: they have been experiencing some sort of symptoms), then we urge them to consult a medical professional immediately. We would recommend consulting specifically a parasite specialist. Our reader can find one of these by Googling ‘infectious disease doctor (name of their closest big city in Iowa)’ or ‘travel disease doctor (name of their closest big city Iowa)’.

In conclusion, while we are unsure what the creature(s) in the first photograph is, we are fairly certain that the creature in the second photo is a Gordian worm, if not a tangle of Gordian worms. Our reader needs not fear for their safety or health as Gordian worms are completely harmless toward humans. Of course, if our reader happens to have any pet grasshoppers or cockroaches, then they should be worried about them!

Article Name
Knot of Gordian Worms Captured by Reader in Iowa
Description
Recently we received a query about a "bug/parasite/worm" that one of our readers in Iowa captured, who went on to elaborate that there are "actually [...] two different ones." The first photograph looks to be some kind of pink creature, with long appendages that snake out from the main body, and the second image showcases what looks to be a tangle of dark brown/black colored worms.
Author
Worm Researcher Anton
Share the knowledge

This many people searched for this info: 1,398