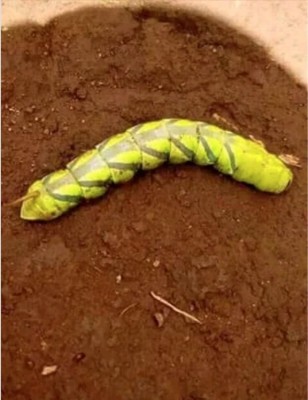 We recently heard from a reader in Kenya about an alarming caterpillar. She explained that in the region she lives in there has been a “shocking trend” of people dying after being stung by caterpillars. These caterpillars look like tobacco horn worms, and they have been spotted near yellowish flowers. She included a photo of the specimen: 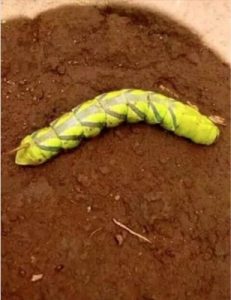 In general, the majority of caterpillars are not dangerous. However, some species of caterpillars do use defense mechanisms to protect themselves against predators. Some caterpillars taste bad, so that birds and other predators will be discouraged from eating them. Other species have urticating setae, which are stiff, hair-like bristles, covering their bodies. The setae, or spines, are hollow and contain toxins. If a human brushes against these spines they might accidentally break them off, releasing the toxin. The reaction to this toxin varies, and might be more or less severe depending on the specific person. Some responses include itching, stinging, burning, rash development, lesions, pustules, swelling, numbness, fever, nausea, and intense pain.

When someone is “stung” by a caterpillar, it is usually just a defense mechanism that occurs when a person comes in contact with the urticating spines. A sting from a caterpillar might result in a few of the symptoms listed above, but if someone is truly sensitive to certain toxins, the sting could be lethal. However, the specimen in the photograph doesn’t have any spines, it has a horn. Despite resembling a stinger of a wasp or bee, the horn on a caterpillar isn’t harmful to humans.

So what kind of caterpillar is this? We don’t know. The creature does resemble a tobacco horn worm. It has a bright green body, a gray patterning, and a horn. The tobacco horn worm has a more complicated pattern than the specimen our reader is dealing with. Since there are so many species of caterpillars, and many of the species look very much alike, it can be very difficult to determine the species based off appearance alone. And is this caterpillar lethal? Again, we aren’t so sure. Based on the photograph, we don’t see any spines that would result in a “sting”. We aren’t aware of any caterpillars that sting that lack urticating setae. Perhaps the caterpillars are unrelated to the unfortunate deaths occurring.

To wrap up, one of our readers reached out to us about a stinging caterpillar that has resulted in the death of some people. We aren’t sure we can be of much help in this situation. We don’t recognize the species of the caterpillar, and we can’t conclude if it has a lethal sting. If any of our readers think they can help with this situation, we encourage them to comment on this post.

Article Name
Killer Caterpillar in Kenya?
Description
A reader reached out to us about a stinging caterpillar that has resulted in the death of some people. We aren't sure we can be of much help in this situation. We don't recognize the species of the caterpillar, and we can't conclude if it has a lethal sting
Author
Dori Franklin
Share the knowledge

1 thought on “Killer Caterpillar in Kenya?”