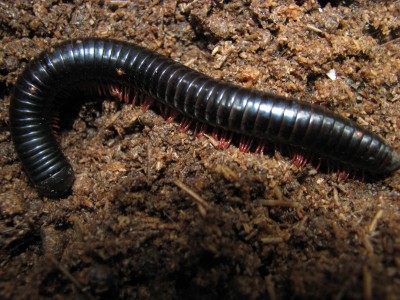 Is Worm on Toddler’s Cardigan Dangerous?

In this article, we will address the concerns of a mom in the UK. She explained that she was going through her toddler’s day bag when she discovered a tiny worm-like organism on her daughter’s cardigan. She didn’t have time to take a photograph or video, but provided an excellent description of the specimen. She hopes that we are able to tell her if it is a parasite or some type of organism that would cause a rash on her or her daughter.

She wrote that the creature is a pink/red color, the width of pencil lead, 1-2 cm long, and has a pair of small antennae that look like little horns. She explained that the creature didn’t wiggle or slither along slowly, but was really quick and sort of “zoomed about.” Also, it seemed to move by shrinking and extending its body. So, what specimen could our reader have discovered on her daughter’s cardigan?

We have two ideas about what this creature could be. Since we don’t have a picture, we won’t be able to determine which it is, but luckily neither are considered dangerous or harmful. Our first thought is that this might be a millipede. Millipedes have small antennae and move quickly because of their many legs. While our reader didn’t mention that the creature in question had legs, some people don’t notice the legs of a millipede because they are so tiny. Millipedes aren’t dangerous, but they might release a foul-smelling fluid when they feel threatened that can cause skin irritation. It wouldn’t hurt to wash all of the contents of her daughter’s day bag, but we don’t think our reader needs to stress about the sighting of this specimen.

Our other idea is that the specimen might be a caterpillar, which is the larva of a moth or butterfly. Caterpillars typically move around in the way our reader described, shrinking and extending their bodies. While they don’t have antennae, some caterpillars do have tiny horns. Like millipedes, most caterpillars are harmless, but some do cause skin irritation. So whether the creature is a millipede or a caterpillar (or something else), we don’t think our reader needs to worry about her own or her daughter’s health. Washing her daughter’s clothes might ease her mind, so we encourage her to do that. Other than that, she can forget about the little specimen and move on. Of course, if she is scared about her or her daughter’s well-being, she should check in with a doctor who is licensed to give out medical advice.

In summary, a reader found a small specimen on a clothing item of her daughter. We don’t have a picture to confirm, but based on the description she provided, we think she might be dealing with a millipede or a caterpillar. Neither are dangerous or considered parasites, but both can potentially cause skin irritation, so our reader can wash her daughter’s clothes to ensure there is no chance of experiencing a rash or finding other specimens hiding in the day bag where the mysterious creature was discovered.

Article Name
Is Worm on Toddler's Cardigan Dangerous?
Description
A reader found a small specimen on a clothing item of her daughter. We don't have a picture to confirm, but based on the description she provided, we think she might be dealing with a millipede or a caterpillar.
Author
Dori Franklin
Comments: 0 Posted by: Worm Researcher Dori Categories: Caterpillars, Centipedes and Millipedes