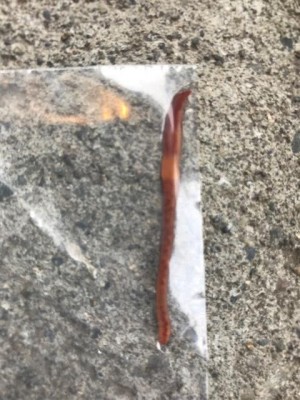 We recently heard from a reader who discovered an interesting creature in his toilet. He did not specify if the worm was found in a clean toilet or after the toilet had been used. He did mention his concern that this creature might be a parasite, especially since he has been infected with a parasite in the past while he was working in India. He hopes that we are able to identify the specimen: 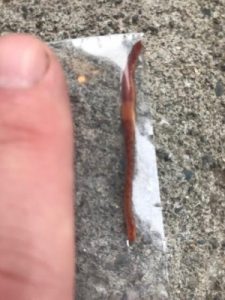 Although there is a little glare in the photograph, it is still a great photo and extremely helpful. Since his finger is also in the photo, we have a good idea about the size of the specimen. We think it is about an inch and a half or two inches long. It is a reddish brown color and has small segments lining its body. We also notice a lighter section about a third of the way down its body.
So, is this worm a parasite? We don’t think so! We are confident that the creature in question is an earthworm. We recognize the worm by its color, segmentation, and especially by the lighter section on its body, known as a clitellum. The clitellum is a raised band that is made up of reproductive organs.
In addition to all of the physical traits, the location of where the creature was found is a big hint. Readers discover earthworms in their toilets on a weekly basis. Despite this being a regular occurrence, we still haven’t cracked the code on why or how exactly these worms end up in toilets. Our best guess is that they come from the pipes. As long as our reader doesn’t continue to find worms in his toilet, we recommend he not dwell on its presence. If discovering worms in his toilet becomes a common occurrence, he might want to reach out to a plumber to investigate the pipes.
In conclusion, a reader discovered a worm in his toilet that we believe is an earthworm. However, since he did mention he was worried it might be a parasite, we encourage him to see a doctor if he is stressed about his health.

Article Name
Is Worm in Toilet Earthworm or Parasite?
Description
A reader discovered a worm in his toilet that we believe is an earthworm. However, since he did mention he was worried it might be a parasite, we encourage him to see a doctor if he is stressed about his health.
Author
Dori Franklin
Share the knowledge