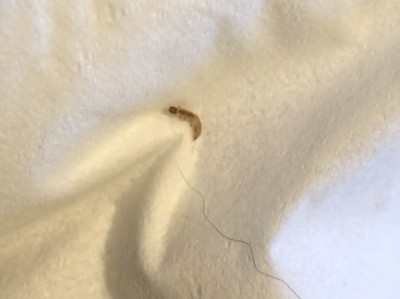 We recently received a few pictures from one of our readers in Wisconsin. She sent photos of a worm-like organism she noticed near her dog’s bed. She is curious if it could be a flea larva, or if it is something that just wandered in (they live in an old house.) She said that her dog doesn’t really scratch, but she still isn’t sure what to think of the specimen! 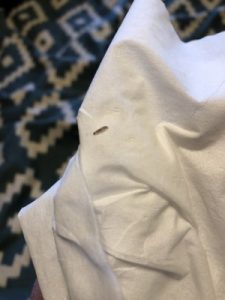 The photo shows a specimen with a segmented body and 3-4 tiny prolegs. It looks translucent in some places and has a dark brown head. Could this be a flea larva?

When flea larvae hatch from eggs, they look like tiny white worms covered in pale hairs. They feed on blood-filled flea feces, a.k.a. flea dirt, which adult fleas excrete after eating. The insides of their tiny, translucent bodies become darker as they eat flea dirt. We have a photo of a flea larva from another reader, which despite the mediocre photo quality, nicely displays how a flea larva looks: 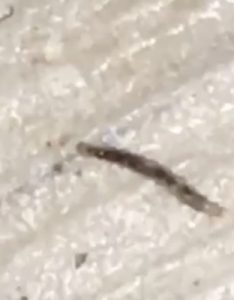 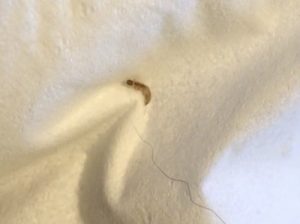 We believe that this isn’t a flea larva. We think it is some type of beetle larvae, but we aren’t sure the species. As long as our reader hasn’t found a bunch of these, she can assume that it just wandered in to escape the Wisconsin winter! We don’t think it is something to worry about.

To wrap up, we believe the larva our reader found near her dog’s bed is a beetle larva, not a flea larva. If she is worried about her dog having fleas or is concerned about his health, we recommend she take him to the vet!

Article Name
Is Worm Found Near Dog Flea Larva?
Description
We believe the larva our reader found near her dog's bed is a beetle larva, not a flea larva. If she is worried about her dog having fleas or is concerned about his health, we recommend she take him to the vet!
Author
Dori Franklin
Comments: 0 Posted by: Worm Researcher Dori Categories: Dog Worms, Worms Found in the House