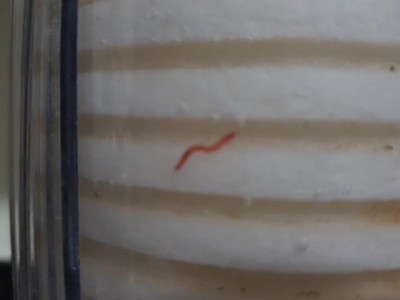 Is Red Worm In Water Purifier a Bloodworm?

December 22, 2017
A reader recently reached out to us about a specimen he discovered in his water purifier. He wants to know if he should change the water filter, or if “it is safe to get let the filter do its job.” Let’s have a look at the creature: 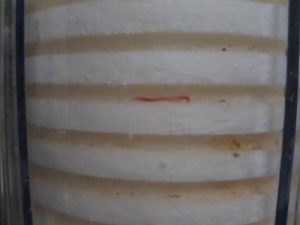 The creature-in-question is tiny and red. We think it might be under an inch long, (However, that approximation is solely based on our estimate of the size of the water purifier, which we don’t actually know.) Despite being unsure about the exact size of this specimen, we are still confident that we know what this creature is. We believe this is a bloodworm! 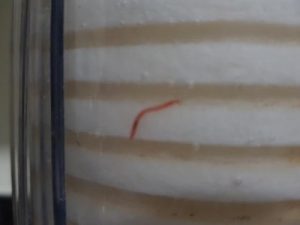 Bloodworms, or midge fly larvae, are common creatures discovered by our readers. Bloodworms are named for their striking red color, which comes from the hemoglobin in their blood (just like human blood!) Like most larvae, bloodworms feed on organic matter. They also need a lot of moisture to survive, which is why this bloodworm probably chose a water filter as its home! However, we have no idea how the bloodworm got into the filter in the first place.

So, should our reader change the filter or is it safe to “let the filter do its job?” On one hand, Bloodworms aren’t known to transmit or carry any human diseases. On the other hand, since they feed on organic matter, its safe to say the filter probably isn’t clean. We recommend he replace his water purifier, or drink at his own risk!

To wrap up, one of our readers discovered a tiny red worm in his water filter. We are confident this is a bloodworm!

Article Name
Is Red Worm In Water Purifier a Bloodworm?
Description
One of our readers discovered a tiny red worm in his water filter. We are confident this is a bloodworm!
Author
Dori Franklin
Comments: 0 Posted by: Worm Researcher Dori Categories: Worms Found in the House