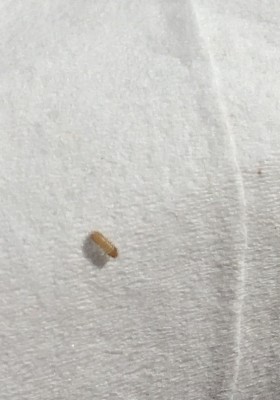 One of our readers recently sent us this message, “I got bit by a bug in Greece. I think it happened when I sat in a dirty taxi in a skirt or in my jeans on a local bus. I’m not sure what the bug was, but I got a rash. I’ve washed all my clothes and when I was wearing the same pair of jeans I found this creature while in California.” The photograph she sent shows a tiny worm-like organism with a brown, segmented body: 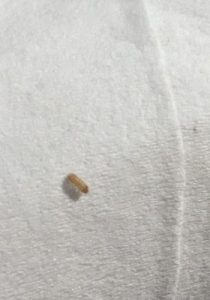 She asked, “What is it? Could this be what bit me? Could it have survived after the washer and dryer? I am very worried.” Well, we don’t think it is what bit her in Greece, but we are confident that the creature she found in her jeans is a carpet beetle larva! Carpet beetle larvae are common household pests that feed on a wide variety of things found throughout a house, including clothing such as jeans. Carpet beetle larvae usually have one primary food source or feeding area in a home, which they can destroy if left unnoticed or ignored. Once they’ve had their fill in one area, they can move to another room in the house looking for additional things to eat. It is this sneaky, destructive behavior that makes them so annoying to get rid of. Since our reader only noticed one of these creatures, we think the carpet beetle larvae population in her home might still be small and limited to her closet, dresser, or wherever she keeps her jeans. She said she already washed all of her clothes, but she should also clean all the drawers and her closet to make sure there are no more carpet beetle larvae lurking around. She should sweep, vacuum, and wipe down all surfaces. We also recommend that she either throw out any clothing that shows signs of damage or have it professionally cleaned! 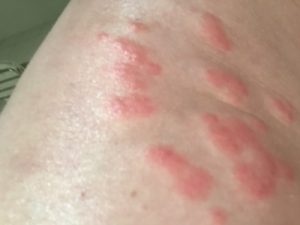 To wrap up, we don’t think the creature our reader found in her jeans followed her back from Greece after biting her. We believe it is a carpet beetle larva, which is a common household pest! Also, while the rash she has might be related to the carpet beetle larva, we can’t confirm this or weigh in on the matter because we aren’t medical professionals.

Article Name
Is Rash From Bug Bite In Greece?
Description
We believe the creature our reader found in her jeans is a carpet beetle larva, which is a common household pest! Also, while the rash she has might be related to the carpet beetle larva, we can't confirm this or weigh in on the matter because we aren't medical professionals.
Author
Dori Franklin
Share the knowledge

This many people searched for this info: 2,624