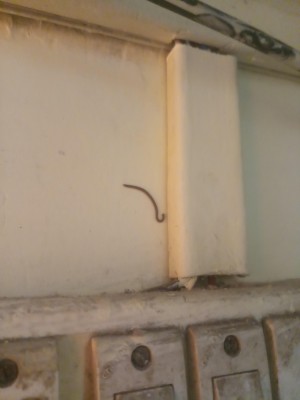 What seems to be a long, dark-colored worm-like creature is stretched across this reader’s wall. Our reader found it there and asked us if it is a baby snake. 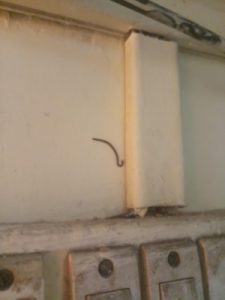 To be perfectly honest with our readers, at first we scoffed a little at the idea of someone finding a snake on their wall. We thought, “surely snakes cannot climb walls.” Naturally, we were wrong. As we are sure most everyone knows, snakes are carnivorous, legless reptiles. There are more than 3000 species, and they come in all sorts of colors and sizes, and can be found in a multitude of habitats. There are snakes in jungles, deserts and even in lakes and oceans. Then there are certain creatures which look like snakes, but are not actually snakes, such as the skink (which is actually a lizard) and the legless amphibian, both of which we have covered here before.

Now, when it comes to climbing walls, snakes have their limitations. Although their cousin the lizard is adept at climbing a variety of different surfaces, take the gecko, for example, which can climb practically any surface, no matter how rough or smooth it is, snakes cannot do the same thing. Unlike geckos, who wedge their microscopic toe hairs in between the miniscule cracks in a surface to stick to it, snakes do not stick to things. When snakes climb something, take a tree for example, they actually climb it. But instead of using hands, or paws, the snake uses its incredibly muscular body. It uses the cracks in the bark of a tree as footholds — so to speak — and slithers its way up the surface, in between these cracks. For that reason, snakes can only climb similar surfaces. Most often, when you find a snake climbing a man-made surface, it will be a brick wall, as this is the easiest surface for a snake to climb, though rough stone walls and similarly structured walls will also do.

So, taking all of this into account, we do not think that what our reader found is a baby snake. From what we can see in her photograph, her wall is too smooth for a snake to climb. In that case, it is more likely that something else is crawling on her wall, like some species of worm. If our reader would like to know what species of worm this might be, we recommend that she send some new pictures, especially ones that are more up close and in better lighting. That would benefit us in being able to make out minute details on the worm, and would give us a better chance at identifying it.

To conclude, we do not think that the creature our reader found crawling on her wall is a baby snake. In fact, we are not sure what it is. The photograph alone does not tell us much, as the lighting and low resolution makes it difficult to discern the creature’s physical characteristics. As we said though, our reader is more than welcome to contact us again with new pictures and we would be happy to try to identify it!

Article Name
"Is it a Baby Snake?" Asks Reader About the Dark, Slender Serpent On Her Wall
Description
What seems to be a long, dark-colored worm-like creature is stretched across this reader's wall. Our reader found it there and asked us if it is a baby snake.
Author
Worm Researcher Anton
Share the knowledge

This many people searched for this info: 887