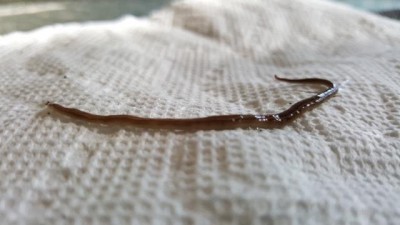 “Does spreading Diatomaceous Earth protect from the flathead worms?” asks this reader in her submission. She provides no further context, or photos, but we will do our best to help her in any way that we can.

First of all, it might be appropriate to define some of the terms used in the submission for the rest of our readers. Diatomaceous earth (otherwise known as diatomite) is a naturally soft, sedimentary rock that, when crushed, becomes a white powder that sort of resembles flour. The powder is often used to kill insects, as the rock is able to completely dry them out.

According to the NPIC’s (National Pesticide Information Center) “page on diatomaceous earth“, it is able to do this “by absorbing the oils and fats from the cuticle of the insect’s exoskeleton. Its sharp edges are abrasive, speeding up the process. It remains effective as long as it is kept dry and undisturbed.”

Moving on, a ‘flathead worm’, more commonly referred to as a hammerhead worm, is a type of predatory flatworm that is not uncommon in people’s gardens. They prey on snails, insects, and other flatworms, and are quite fascinating creatures. Among their many abilities, hammerhead worms are able to secrete a toxin that liquefies their prey, so that they can then, quite literally, drink up their food using a straw-like appendage near their head.

With all of that said, hammerhead worms are not dangerous to humans or pets. The most they can do is secrete this same toxin onto one’s skin, which may cause stinging and/or irritation. In short, they cannot melt humans and big animals.

Now, to answer our reader’s question, it is entirely possible that spreading diatomaceous earth (on a lawn, we presume) will deter hammerhead worms from coming onto one’s property. One story from a response on “a gardening forum” called Dave’s Garden, someone wrote that they were able to “kill” “land planarians” using “diatomaceous earth”. The term ‘land planarian’ refers to any species of flatworm that lives on land, such as the hammerhead worm.

We do not recommend killing hammerhead worms using diatomaceous earth, because although they pose a threat to earthworm species when large numbers of them occur, they do not pose a threat to human or animal health. That said, we think it is fine for our reader to use diatomaceous earth on her lawn in an attempt to discourage hammerhead worms from showing up in the first place.

To conclude, this has been a brief overview of the effects and usage of diatomaceous earth, and its applicability to preventing hammerhead worm populations from coming on to one’s property. We hope the information provided is useful and helpful, and we wish our reader the very best.

Article Name
Is Diatomaceous Earth Effective Against Hammerhead Flatworms?
Description
"Does spreading Diatomaceous Earth protect from the flathead worms?" asks this reader in her submission. She provides no further context, or photos, but we will do our best to help her in any way that we can.
Author
Worm Researcher Anton
Share the knowledge

This many people searched for this info: 345