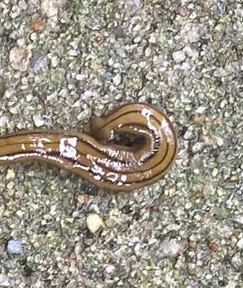 “What the heck is this?” asks this reader about the brown, striped organism pictured below. “It’s easily 10-to-12-inches long, and found in Greenville, South Carolina.” 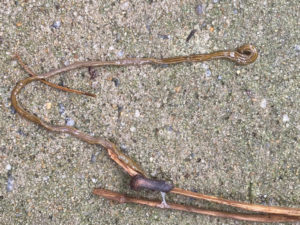 From looking at the organism, we can immediately tell that this is a flatworm. Likewise, by zooming in on the top end of the flatworm, we can tell that it is a hammerhead flatworm. This particular hammerhead is incredibly long, though they can grow to nearly 20-inches (depending on the species!).

Hammerhead worms are predatory worms, and are a great threat to the insects, snails and other hammerhead worms that they eat. That said, they are not dangerous to humans, so our reader does not need to worry for her health and safety. Despite this, our reader should still use caution when approaching this worm, as they can secrete a fluid which can sting upon contact. Rashes and itching may also occur, depending on if one has an allergic reaction to it.

Interestingly, this fluid is actually deadly to the prey the hammerhead hunts. In actual fact, there are two different fluids that the hammerhead secretes, one of which paralyzes the victim, and the other which melts them (quite literally). After they melt their prey, the hammerhead worm extends a straw-like appendage from their face which they use to slurp up their meal. On top of that, they possess abilities such as tracking prey using sensors underneath their head, which monitor changes in pH levels (among other biological signatures), as well as growing back lost body parts.

To conclude, the organism our reader found is a hammerhead flatworm. These creatures are not dangerous to humans, but the fluid they secrete can sting. So, in the case that our reader needs to move the worm, we advise scooping it up onto a dustpan and wearing gardening gloves to handle the worm safely. We hope that this article answered our reader’s question to a satisfactory degree, and we wish her the very best!

Article Name
Incredibly Long, Brown Worm is a Hammerhead Worm
Description
"What the heck is this?" asks this reader about the brown, striped organism pictured below. "It's easily 10-to-12-inches long, and found in Greenville, South Carolina."
Author
Worm Researcher Anton
Share the knowledge

This many people searched for this info: 333