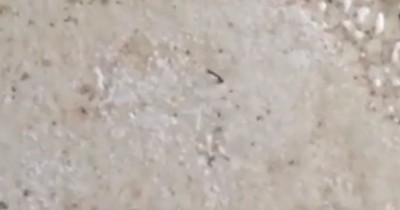 One of our readers recently wrote to us about a worm-like organism that is causing a bit of a family dispute. She explained that her daughter found a few creatures at her home in California, where it has been in the 90s for the past week. The daughter discovered one on her son’s hand, and one on her arm. The specimen is quite tiny, measuring under half an inch long. Our reader has been trying to help her daughter identify the critter, and the daughter is worried that the specimen might have caused her son’s rash. The reader believes the creature is an inchworm, but the daughter isn’t so sure. She sent us a video of the worm, and we have included a screenshot from the video: 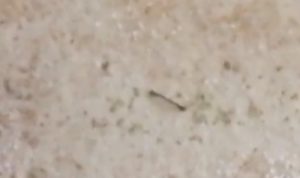 We agree with our reader about this specimen, it is an inchworm! Inchworms, which are named for the way that they measure the earth when they walk, are also known as cankerworms, spanworms, measuring worms, and loopers. Inchworms are the larvae of geometer moths, so in other words they are caterpillars. Like many other caterpillars, inchworms can be considered pests because of the damage they cause to foliage.

We recognized the creature right away based on the way it moved in the video. Inchworms have three pairs of true legs at the front of their bodies, and two or three pairs (depending on the species) of prolegs at the rear. True legs are segmented, and often have a claw at the end. Prolegs are cylindrical, unsegmented, and have microscopic hooks used like suction cups to facilitate movement and attachment. Since inchworms have no legs in the middle of their bodies, the way they move is very unique, and is often used to identify them.

We don’t know if the inchworm caused the rash on our reader’s grandson. We suppose it is possible, but inchworms are generally known to be harmless to humans. Since we aren’t medical professionals, we encourage the daughter to bring her son in to see a doctor to have the rash examined.

To wrap up, a reader sent us a video of a caterpillar that her daughter found. We believe this specimen is an inchworm!

Article Name
Inchworms Found in California
Description
A reader sent us a video of a caterpillar that her daughter found. We believe this specimen is an inchworm!
Author
Dori Franklin
Comments: 0 Posted by: Worm Researcher Dori Categories: Inch Worms