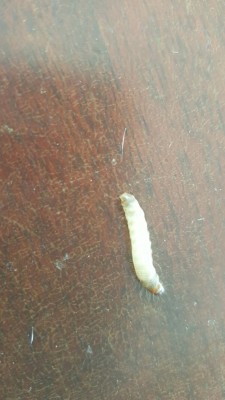 We recently heard from a reader who is quite worried about her lemon trees. She explained that in the last few months she has noticed a few worm-like organisms in her lemon tree pots, but it became a real issue after she fertilized her plants. She wrote, “I scratched up the top couple of inches of both tree pots, sprinkled in organic citrus fertilizer and watered them. About half an hour I noticed a MASS EXODUS of worms crawling everywhere over the soil and outside of the pots.” It took her about 20 minutes to get rid of all the worms, but 30 minutes later they were back! Since then she has found more every day. She has had these trees for 3 years and never dealt with anything like this, so she thinks they might have come from a foreign source. Her husband recently brought home a spider plant, and she thinks it might be the culprit. Her main concern is that her trees have lemons and flower buds on them, and she is worried that if she has to re-pot them she will lose the fruit. So, what are these creatures and are they harmful? 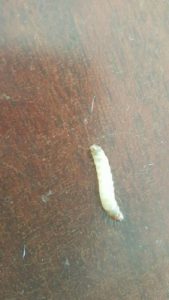 There are plenty of caterpillars that feed on lemon trees and citrus plants. Most notably are California orangetails, which are brown and green with white spots. In other words, they bear no resemblance to the white creatures in the picture our reader sent. In fact, none of the caterpillars known to feed on lemon trees look like this specimen. We think it looks more like a beetle larva.

Unfortunately, we don’t know exactly what our reader is dealing with. It is possible that these larvae have just recently hatched from eggs that were buried in the soil and that’s why they have suddenly appeared. It is also possible that they came from the new spider plant as our reader suspects. If our reader’s plants are still growing and healthy, she might not need to do anything about these worm-like organisms.

We think it would be best for her to visit a Home & Garden store for advice on this matter. Although we do know about some pest management, we don’t want to be responsible for the life or death of her lemon trees, especially since we aren’t entirely sure what she is dealing with. We wish her the best of luck and hope her lemon trees come out of this ordeal unscathed.

Article Name
Hundreds of White Worms Emerge From Lemon Tree Pots
Description
We recently heard from a reader who is quite worried about her lemon trees. She explained that in the last few months she has noticed a few worm-like organisms in her lemon tree pots, but it became a real issue after she fertilized her plants.
Author
Dori Franklin
Comments: 0 Posted by: Worm Researcher Dori Categories: Worms Generally