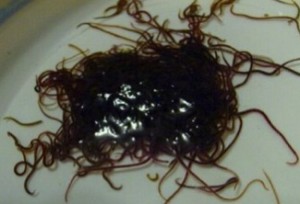 A reader wrote to us recently about the small, black worms she is finding in and around her garage door at night. She claims to be finding “hundreds” of worms, so she is clearly having some trouble with these creatures. In addition to the adjectives small and black, the reader describes the worms as “round,” by which we think she means their bodies are cylindrical, or perhaps the creatures are curled up. If the entire bodies of the worms are round, one probably wouldn’t suspect them to be worms. As a matter of fact, though, our reader probably isn’t finding worms; rather, she seems to be finding millipedes, a common household pest. So, the small, black “worms” our reader is finding are in fact small, black millipedes, or so we posit.

Unfortunately, the reader did not submit a picture along with her question, which would have been particularly helpful in this instance because millipedes are relatively easy to identify. (That is, it is relatively easy to tell that something is a millipede, not to identify the exact species of millipede it may be, which is difficult because there are thousands of different species.) Millipedes have tons of legs, so if we receive a picture from a reader of a creature with legs lining their bodies, it is generally clear that he or she is dealing with a millipede (or a centipede, but in a moment we’ll explain why we don’t think she is finding centipedes). The reader did not actually make any reference to legs, which slightly compromises the plausibility of our millipede hypothesis, but we still have a few reasons for thinking that our reader found millipedes.

To begin with the leg issue, millipedes do in fact have lots of legs – two per body segment (not including the first three segments), more precisely – but these legs are often difficult to see. Millipede legs are generally under the creature’s body, more or less out of sight, which is why millipedes are often mistaken for worms, which do not have legs, depending on what one defines as a “worm.” In contrast, centipede legs extend from the creature’s body, making them clearly visible, which is why we don’t think our reader is finding centipedes, even though they are, like millipedes, a common household pest. Centipedes would not be readily mistaken for worms, and it would be strange if our reader omitted the legs in her description of the creatures she is finding if they are in fact centipedes. Again, the same cannot be said of millipedes.

We also think our reader is finding millipedes because everything she says is consistent with this. The most common millipedes that people find in their houses are a dark color and are about an inch or so (a few centimeters) in length. In other words, they might be reasonably described as small and black, to use the words of our reader. Common household millipedes also often have rounded bodies, just like the creatures our reader is finding (assuming we are reading the word “round” correctly). Finally, millipedes are exactly the type of creature one might find in his or her garage during the fall, which is when our reader wrote to us. (They are also common during the spring.) They feed on rotting organic matter (e.g., dead leaves) and must live in moist environments, so garages often serve as a good habitat for millipedes, especially after it rains. (Basements are also popular with millipedes.)

To conclude, we think our reader is finding millipedes for the reasons stated above. Although the reader was understandably disturbed by all the millipedes she is finding, she should at least take some comfort in the fact that they aren’t at all dangerous. Moreover, millipedes tend to only briefly inhabit homes because in general they are too dry of an environment. They come in a brief wave, mingle for a couple of days, and then die, leaving their desiccated bodies behind, which can be easily vacuumed up. If the reader is experiencing a prolonged millipede infestation in the garage, it is very likely because the garage is too damp. The reader should make an effort to remove moisture from this part of the house (perhaps using a dehumidifier) if she is in fact dealing with a chronic problem. This should address the millipede problem in short order.

1 thought on “Hundreds of Small, Black Worms in the Garage”