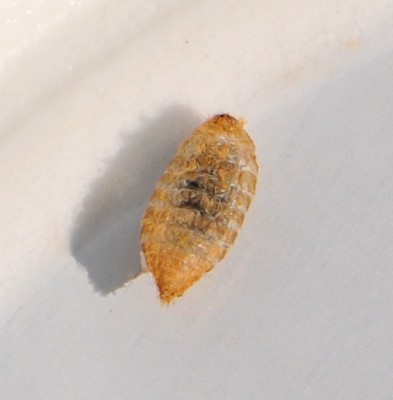 Firstly, we must understand what a pupa is. A pupa is the label we use for any given insect when it enters the final stage of maturation before adulthood. The pupal stage is characterized by the formation of a protective case in which the pupa can remain undisturbed for a long period of time. This protective case is referred to either as a cocoon or a chrysalis. Inside the chrysalis, although the pupa seems to be inactive, it is actually undergoing metamorphosis, the great change by which a larva becomes an insect; the caterpillar becomes a beautiful butterfly. In fact, the reason insects tend to be the most destructive at their larval stage is because they need to consume an incredible amount of food, and thus energy, in order to sustain themselves inside the chrysalis and have enough energy to undergo metamorphosis.

Secondly, now that we understand what a pupa really is, we get to the part about actually spotting one. How do pupae and their chrysalises differ in appearance to larvae and mature insects? Well actually, quite a lot. In most cases, the pupal stage is the most ‘boring’-looking stage of an insect, and this is purposeful (however purposeful looking boring can be). At the pupal stage, insects do not want to be found by predators, but want to blend in with their surroundings or simply appear unappealing. They can appear as small and unassuming so as to make one think they are just a piece of lint, a tiny rock or some piece of garbage. However, if one looks at a pupa up close, it will usually have some physical indication of what the larva looked like. For instance, if the insect was striped during its larval stage, the chrysalis is also likely to be striped. Examples of this are the monarch butterfly and the carpet beetle. 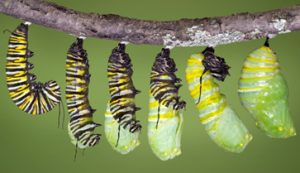 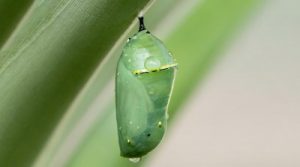 Above we have pictured the stages of a monarch butterfly caterpillar becoming a pupa. As one can see, the larva is black, white and yellow in color, but then once it enters the pupal stage, its chrysalis becomes green, so as to blend in with the other leaves on the tree. And yet, some yellow stripes are still visible on the chysalis. Also, as the pupa nears the end of its maturation, the chrysalis becomes more and more transparent, revealing the fully-grown butterfly underneath. This is not the case for all insects though. Moreover, below we have a picture of a carpet beetle pupa. During their larval stage, carpet beetles appear to be brown or black in color, with distinct stripes, bristles and sometimes even long tails. And yet, during the pupal stage, they become a bland beige color (albeit there are some stripes visible). To the naked eye, this pupa might simply appear to be a rather large bread crumb. So, how is one expected to spot one of these? 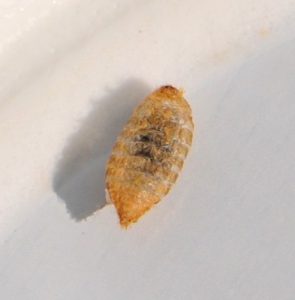 To be frank, we would not expect someone to be able to spot a pupa like this in the household. It is pupae like those of the carpet beetle that make infestations of these critters so hard to catch in time. Rather than urge our readers to go on a scavenger hunt around their home with a magnifying glass, we would rather use this as an opportunity to stress how important consistent housekeeping is to the prevention of bug infestations. You might think you are fine putting off vacuuming one week because ‘it’s just some bread crumbs and lint’, but now you might question yourself, ‘is that really a breadcrumb?’

Lastly, so as not to stress our readers out and make them think that every speck in their home could be the pupa of some insect, we thought we would leave a photo of an insect whose pupal stage is so obvious that it seems that whatever forces govern the processes of evolution did not bother trying to shield this insect from being spotted. The photograph below is the pupal stage of the drone fly, whose larvae are known as rat-tailed maggots due to the long tail that is still present at the pupal stage. 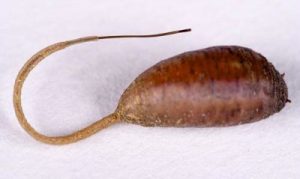 In conclusion, this has been an article briefly detailing the functions and physical characteristics of a pupa. We suppose that the answer to the question of how to spot a pupa is that one should try to look a little closer at any oblong, roundish shapes that may look a little out-of-place and see if it just might be the chrysalis of an insect.

Article Name
How to Spot a Pupa
Description
Most of the articles we write at AllAboutWorms deal with some sort of worm-like creature, which is usually either an insect at the beginning of its life cycle (a larva) or a mature worm (an earthworm or millipede, for example), but what about that in-between stage, where a creature will neither look like a larva, nor whatever creature it grows up to be? Most insects will have a pupal stage that comes between the larval and final stage, and this article will provide some insight into how to spot an insect at this stage, before it breaks free an adult.
Author
Worm Researcher Anton
Comments: 0 Posted by: All About Worms Categories: Carpet Beetle Larvae, Caterpillars, Worms Generally