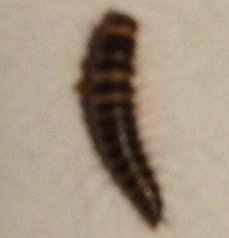 We recently received a question from a reader who found three worms in a stack of towels in her closet. She reports that the closet is almost never opened – it is “only used to take a big stack of towels out or to put them back” – so she is first of all wondering how the worms got in her closet. However, her more pressing question has to do with getting rid of the worms in her closet. She has so far found three worms nestled between the strands of the towels, clinging to the threads, but hasn’t exhaustively searched the closet because she is scared as to what she might find, leading her to believe that there could be more worms tucked away. She wants to get rid of the worms in the closet “completely,” and that’s where we come in.

Strangely, the reader wrote her question to us as if she had sent a picture, but in fact she didn’t. Indeed, she never directly describes what she found at all, and simply refers to the creatures in question as “these little guys” and then uses variants of the plural pronoun (“they” and “them”) thereafter. Toward the end of her email, she notes that she doesn’t like “worms or cockroaches or lizards or any other insect in particular,” and this is the closest she comes to naming any precise animal.

Despite this lack of information, and despite our use of the word “worm” so far, we think our reader might have found carpet beetle larvae, the most common household pest we write about. (These creatures are almost invariably referred to as “worms” by readers, which is why we adopted the word at first, but they are actually the larval form of beetles, not worms.) The room in which the reader found the creatures (an infrequently used closet) and their behavior therein (eating or unraveling the towels) is consistent with carpet beetle larvae, and frankly we have no other information to work with, so we’ll posit that she found carpet beetle larvae in order to move forward. (Some of what we say can be applied to any pest she might have found, so even if she didn’t find carpet beetle larvae, our advice won’t be totally irrelevant.)

We have written about getting rid of carpet beetle larvae several times before, so we will channel what we know to our reader’s specific situation. To begin, we don’t think there is any great mystery as to how the creatures ended up in the closet: carpet beetles larvae are tiny creatures that feed on various materials found in houses (including clothing, bedding, and of course carpets), and they like to stay in dark places out of harm’s way, so an unused closet is essentially a perfect place for carpet beetle larvae. As long as the closet isn’t vacuumed-sealed or something like that, a small larvae (or for that matter the larger adult form) wouldn’t have trouble getting into it.

As for getting rid of the creature, the reader must of course remove the larvae from the closet, either personally or with someone else’s help. In general, carpet beetle larvae aren’t really harmful because they don’t bite, but their hairs can cause skin irritation, so our reader should avoid picking them up barehanded. (Some sort of cleaning glove could be used, for instance, or a vacuum might do the trick as well.) Since the larvae have dug into the towels, she should wash all the fabrics in the closet, as this will also eliminate any larvae tucked into the folds of whatever materials she has stored away. The goal is to get rid of all the living pests so that they can’t reproduce and start another generation, so the cleaning should be thorough. With everything removed from the closet, the reader should vacuum carefully and make sure there are no obvious holes or gaps in the wall that might be allowing the beetles and their larvae to get into the closet. You can’t completely seal any house from the outdoors, but you can at least limit your exposure by not giving insects an easy route in (hence the existence of things like window screens). Finally, and although this may be hard to implement, it is inadvisable to leave stacks of clothing, bedding or other materials completely unused for long periods of times. A stack of towels that are basically never used or washed, even if they are clean when originally stacked, could attract carpet beetle larvae. It is good to have an active linen closet, in short.

Again, we aren’t sure our reader found carpet beetle larvae, but there are decent reasons for supposing she did, even though our reader supplied us with no physical description of what she found. And even if she didn’t find carpet beetle larvae, she would most likely profit from the advice we outline above. Getting rid of any pest fundamentally requires the same thing – elimination and prevention – and a thorough cleaning of the affected closet certainly can’t hurt.

Article Name
Small Worms that Infest Towels in the Closet
Description
We recently received a question from a reader who found three worms in a stack of towels in her closet.
Author
All About Worms
Share the knowledge